Challenges ahead for MCTS, but good news in Westown, Lake Park, Silver City, and the Menomonee Valley 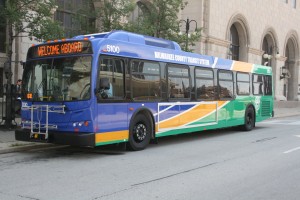 A new report from Milwaukee County Transit System managing director Lloyd Grant analyzes the financial sustainability of the system over the next five years, and, you guessed it, things look really bleak. The arrival of the bad news comes as no surprise to those that have followed the issue. CMAQ funds, the latest stop gap funding mechanism used to keep the system from falling off the proverbial cliff, will expire in February of 2014. The report estimates a service cut of 19 to 29 percent if nothing is done. Unlike many of its peer systems, which have a dedicated local funding source, MCTS is heavily reliant on federal and state aid. The recent state budget that cut aid by 10 percent to MCTS therefore had a large affect on the system. To maintain the level of service as it is today (after ten years of annual service reductions, fare increases, or both) annual local funding needs to raise from $19 million to $48 million.

Frankly, I’m impressed that Milwaukee County and MCTS have managed to make it this far by creatively using federal capital funds to prop up their operating budget (CMAQ for the MetroEXpress, and the county’s share of the $91.5 million for standard replacement buses). They’re unfortunately out of options now. County Executive Chris Abele’s first budget staved off major cuts by using a large collection of one-time federal funds, but that option is extremely unlikely to be available again. Will Abele support a dedicated funding mechanism such as a county-wide wheel tax or a sales tax? It’s a position he refused to take during his campaign. For the sake of mass transit in Milwaukee, I hope he changes his mind. He’s sure in an unenviable position having to deal with the can Scott Walker managed to kick down the road for almost ten years.

There is now one less vacant storefront on West Wisconsin Avenue thanks to a creative initiative to convert the empty Grand Theatre into a visitor kiosk. Milwaukee Downtown (BID #21) ambassadors will staff the facility from 11 a.m. to 9 p.m. weekdays, 1:00 p.m. to 7:30 p.m. Saturdays and noon to 5:30 p.m. Sundays.

Momentum doesn’t appear to be swelling to restore the theater at this point, but it’s certainly a more effective use of the facility then the MEDC’s (read: the city’s) rush to tear down the Sydney HIH complex.

Cheers to everyone involved for putting this together so quickly.

Historic Milwaukee, Inc. is holding a design contest to create a t-shirt for the second annual Doors Open Milwaukee event. The shirt will be sold by HMI during the event. The winner will receive a one-year membership to HMI and an additional cash prize.

Doors Open Milwaukee will take place on September 22nd and 23rd this year.  A final building list isn’t yet available, but the event aims to build on the success of the first installment, which had over 10,000 attendees, 42,000 site visits, and 30 in-depth tours.

A gallery of submissions to-date can be found on HMI’s Facebook page.

The next Urban Milwaukee Book Club will be held on August 6th from 6 p.m. to 7:30 p.m. at My Office, 763 N. Milwaukee St. This month our reading will focus on the ups and downs of public financing for sports stadiums. The book of choice is Fields of Schemes: How the Great Stadium Swindle Turns Public Money into Private Profit, Revised and Expanded Edition.

Discussion will almost certainly revolve around the proposal for a new basketball arena in Milwaukee, and the past financing of Miller Park. Despite attempts by others to paint me as a sure-thing supporter for a new basketball arena (as I’m a Milwaukee Bucks season ticket holder), I have yet to make up my mind on the topic and look forward to discussion on the issue.

A new stage opened yesterday at Lake Park. The new Summer Stage replaces an uncovered, plywood stage with an attractive timber frame superstructure with a concrete base (see photo below). The new stage was paid for by a donation from the Windhover Foundation, with additional funds from the family of Dick Burke and Lake Park Friends. 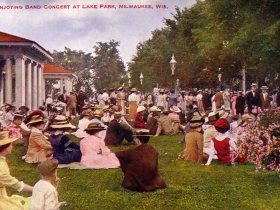 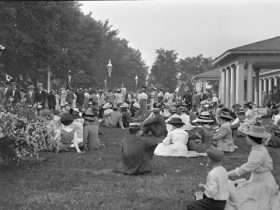 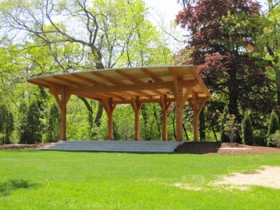 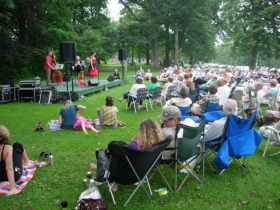 Summerfest marks the high point of foot traffic through O’Donnell Park and across Lincoln Memorial Drive as festival goers attempt to enter and exit the grounds. An excessive amount of security and temporary fencing reinforces the fact that despite their being sidewalks in every direction, the intersection of Lincoln Memorial Drive and Michigan Street wasn’t designed for crowds of pedestrians. It’s a little easier to deal with the unfortunate intersection this year knowing that a redesign could finally be coming down the pipeline.

The Downtown Transit Center redevelopment will be the first stage of the re-envisioning of the lakefront-downtown connections, which should draw more public attention in the coming months as Milwaukee County picks a developer. If public financing assistance is to be required as part of that development, the redesign of the intersection should certainly be included as an amenity.

The proposed Potawatomi Hotel in the Menomonee Valley will break ground on July 12th. The 20-story, 382-room hotel will also include a 480 stall parking garage addition immediately east of the existing parking structure.

Alec Brooks, of the Milwaukee Neighborhood News Services, takes a look at the new Urban Ecology Center set to open in September at 3700 N. Pierce Street on the edge.