New Bridge to the Valley

The bike and pedestrian bridge will connect Mitchell Park to Hank Aaron trail and Menomonee Valley.

By Dave Schlabowske, Bike Federation of Wisconsin - Dec 14th, 2012 09:48 am
Get a daily rundown of the top stories on Urban Milwaukee

On a recent morning I got up early to photograph the workers crane in the first section of a new 270-foot long bike and pedestrian bridge from the Domes to the new park and extension of the Hank Aaron State Trail under construction in the Menomonee Valley. The whole lift took about an hour and was in place by 9:30 AM. 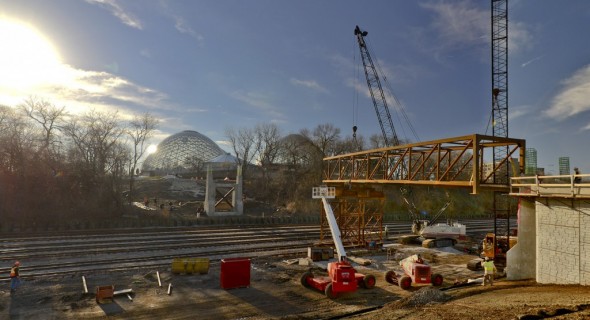 The remaining two 103 foot long sections will be lifted into place soon. There are good spectating opportunities from the sidewalk on the 27th Street Viaduct. If you want to watch, you should probably show up no later than 7:30 in the morning. Dress warm in case you have to stand around and wait for a couple of hours like I did.

Once complete, this bridge will connect the Domes and the Clarke Square Neighborhood to a park that is under construction in the Valley between 27th and 37th Streets. The 24-acre site was once a rail yard nicknamed the Airline Yards, but has been vacant for decades. The project is one in a series of integrated projects made possible through Menomonee Valley- From the Ground Up, a collaboration of the State of Wisconsin, City of Milwaukee, Menomonee Valley Partners and Urban Ecology Center, with financial support from public and private sector partners.

The new park and bridge will become part of the Hank Aaron State Trail, owned and operated through a partnership of the City of Milwaukee and the Wisconsin Department of Natural Resources.  When opened in summer 2013, the park will include two bike/pedestrian bridges, community gardens, access to the Menomonee River for fishing and canoeing, a mile of trails, and new habitat for birds, fish, and other wildlife.   The park will become an outdoor science classroom for a new branch of the Urban Ecology Center, an organization that uses urban natural areas for hands-on science and environmental education through school partnerships and community programs.  A bike/pedestrian bridge will connect the park to Mitchell Park and the Clarke Square neighborhood.

The whole redevelopment of the valley has been fun to watch. I remember in 1996 when the State approved the Hank Aaron State Trail plan and then in 2002 when City of Milwaukee had a National design competition for landscape design in what was then an industrial wasteland in the Menomonee Valley. Since then it has been undergoing slow but steady progress, and today stands as a successful example of a government and private partnership. Thanks to all that planning, new life and jobs have returned to the Valley in abundance.

The view to the east of the 27th Street Viaduct showing the trails and park under construction. You can see the new bridge over the river just east of Palermo’s Pizza.

The Bike Federation’s new office along the trail is just one example of trail oriented development. The still- growing businesses in the Valley have already created more than 5,000 family-supporting jobs and now generate more than $12 million in state taxes and $4 million in property taxes. Just as important, life has returned to the once-abandoned industrial area. Thousands of people ride, run and walk the Hank Aaron State Trail every week. During the salmon and trout runs, I typically see dozens of people throwing flies into the river on my daily rides to and from work, and the river is thick with spawning fish and dozens of fly fishermen.

3 thoughts on “Bike Czar: New Bridge to the Valley”