A proposed trail called an "Artery" could renew an abandoned, 2.4 mile strip of land along a former railroad track. 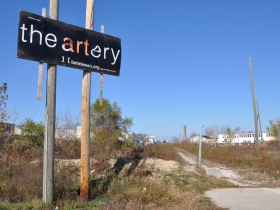 The Artery. Photo by Christine Pedretti.

The ARTery, a project by the social network beintweeen, aims to reclaim land, connect communities and create a forum for art by making what it calls a “creational trail” along one of Milwaukee’s old railways. The project recently received a “kickstart” as organizers successfully crowdsourced over $11,000 for the project.

The trail would follow a 2.4 mile strip of land roughly from the intersection of Keefe Avenue and Richards Street to Hampton Avenue. The corridor is currently an abandoned industrial ground that’s become a place to dump garbage, including hard-to-dispose materials like tires.

Keith Hayes, founder of beintween.org, says the project is meant to be a platform for local neighborhoods to create a place by and for themselves.

The goal is to “connect people,” says Hayes. “We hope it will be something that invokes participation by those in the community.”

A Cleveland native, Hayes studied at the University of Miami and spent 18 months in the Virgin Islands, finally landing in Milwaukee to earn his master’s degree in architecture at UW-Milwaukee.

He’s an avid bicyclist, with a ready knowledge of the city’s bike trails and a sturdy bike lock that travels with him. He even made bikes for a while and created bikeith.com to sell them.

He then founded beintween.org, which describes itself as a “social + spatial network improv(is)ing spaces to build community.” It encourages people who are between jobs, relationships, or other chapters of their lives to use their talents for creating local change.

Hayes says he was between jobs himself for a while and wanted to to create an outlet for “leftover talents.” The goal of beintween is to yoke such talent with leftover spaces.

The site for the ARTery was found by looking at railroad tracks and analyzing census data. Its location is something of a dividing line between ethnicities.

Hayes describes the Riverworks Center as a no-man’s land because it acts as a buffer zone between the river and the rail.

“So how do we connect neighborhoods that were for a long time divided by these two spaces? The linear park is something that’s proven successful.”

The mostly vertical path will also include “stitches” going across it to allow people to access the path from different areas.

The current construction on Port Washington Road makes it difficult for people from Harambee to access their shopping needs in Riverworks. People must go down a steep hill toward the speeding traffic on Capitol Drive. The stitches would allow people to traverse this area more easily, especially people with strollers or limited mobility.

The ARTery also emphasizes the idea of reclaiming materials, especially discarded tires, and creating a new use for them.

Hayes wants to use a medium he calls “matireal” as a foundation for the path. The method involves cutting tires apart so they become flat and then pinning multiple strips together to create a corrugated surface.

While beintween will be making the path, they envision projects being created within particular areas to represent the neighborhood. One such project is an amphitheater made from tires.

“We find that one of the most engaging pieces of art is temporary art, a performative piece of art,” says Hayes. People have already approached him expressing their interest in spoken word recitals.

Another proposal is clusters of PVC pipes that personify the community by painting them according to ethnicity demographics.

It would allow people to see changes in the population spatially, but also over time.

“Maybe we can come back ten years from now, document what it was, and then see how the density changes,” says Hayes. “Or maybe the ARTery was able to add some diversity through the stitching of these communities.”

Brian Monroe is the owner of Earthbound Development LLC and the land that will someday host the ARTery. He bought roughly 20 acres from Wisconsin & Southern Railroad five years ago. He hopes to eventually sell the land to the City of Milwaukee and make it public property.

“If they [the city] make the purchase, it’s going to be another year or two before they can get going on it,” says Monroe. “So in the meantime we’re going to experiment and do a small section near Capitol Drive just to show the city and the surrounding businesses what can be done.”

The first phase of the ARTery would connect the end of the Beerline Trail at Keefe Avenue and Richards Street to the overpass at Capitol Drive.

Murphy Drummond is a neighbor of the Artery living near Hampton Avenue. He says the current use of the land is not only an eyesore, but brings pests like mice to the neighborhood.

“It’s good land, all it needs is a little caretaking and it would be beautiful,” says Drummond.

Hayes has attended block meetings in the neighborhood and has not encountered any opposition to the ARTery.

“Initially, there were a couple of businesses that didn’t want the traffic behind their buildings,” says Monroe. “I mentioned to them it would actually improve the safety if there were more people using it.”

Drummond says he sees it as a positive change in the community.

“You want people to be protected. You want it to be as safe as possible,” says Drummond. “Anything to make it better than it is now would be an improvement.”

Beintween does not have a nonprofit status, so it cannot collect grants or accept tax exempt donations. Hayes hopes they can work with the city to look at how tires are being disposed, and hopefully lower the environmental cost of tire disposal.

Currently the city pays two dollars for every discarded tire they collect, which are then driven to Minnesota for disposal.

“If we can take that same taxpayer money, and there’s even the thought that we could take a little less, we could benefit the tax base. Then we could turn that money and engage local folks to create their own park and provide employment at a living wage,” says Hayes.

Beintween also hopes to engage groups like Groundwork Milwaukee, which would allow youth to get paid for doing hands-on work to better their own community.

Hayes says beintween’s internal deadline for the project is May 2015.

This fall, beintween.org held a launch party for its new project, the ARTery. Guests spend the evening enjoying food, entertainment and swinging.

One thought on “Healing an Urban Scar”