A new study finds Wisconsin a leader in environmental racism. But is the state improving? 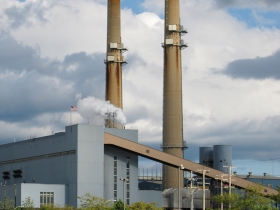 Environmentalists have long been beating up on coal as dirty pollutant. But in last 20 years of so, a new twist was added: “environmental racism.” The argument was that toxic waste sites were more likely to be dumped or air and water pollution created in poor and minority neighborhoods.

A new study by the NAACP, “Coal-Blooded: Putting Profits Before People,” argues that coal-powered plants are more likely to be located in poor and minority neighborhoods and it singles out the Menomonee Valley plant operated by We Energies as one of the worst culprits. The company has already announced its plans to convert the plant’s fuel source to gas by 2016, but there are another eight coal-powered plants in Wisconsin which the EPA lists as being “high-priority violators” of the Clean Air Act. That includes the newer Oak Creek power plant run by We Energies, but company spokesperson Brian Manthey says that updated emission controls were installed in the plant this past summer.

The study is in many ways more damning of the Midwest than of the nation. When it comes to coal plants located near poor and minority neighborhoods, 8 of the 12 worst offenders were in the Midwest: Illinois is ranked as the very worst state, with Ohio, Indiana and Michigan not far behind and Wisconsin the fifth worst of the group.

It’s certainly possible for states to get along without coal. The study notes that the ten states least dependent on coal — Connecticut, Oregon, California, South Dakota, Hawaii, Maine, Alaska, Idaho, Rhode Island, and Vermont — produced a combined total of less than 1 percent of the nation’s coal-fired electricity. Many of these are states have great natural beauty, so perhaps they place more value on a clean environment.

The impact of coal emissions on public health is considerable; these pollutants can contribute to heart problems, lung disease, asthma and other respiratory ailments. The National Research Council has calculated that approximately 1,530 excess deaths per year are caused solely by particulate matter pollution from U.S. coal-fired power plants, and that “aggregate damages associated with emissions” from coal-fired facilities in 2005 were approximately $62 billion. The report’s authors note that other studies have calculated figures for total costs and mortality caused by U.S. coal plants that were up to six times higher.

Milwaukee’s four-decades-old valley plant has long been a target of criticism from environmental groups like the Sierra Club and by the Milwaukee Innercity Congregations Allied for Hope, which were involved with the Cleaner Valley Coalition. “Thousands signed petitions, hundreds have shown up at public hearings and talked with We Energies and the regulators,” Jennifer Feyerherm of the Sierra Club told the Milwaukee Journal Sentinel. “This is what happens when people use their power together.”

But other factors played a part in We Energies’ decision. Elsewhere, utilities have switched to gas because the advent of hydraulic fracturing has expanded U.S. gas reserves and lowered prices.

We Energies declared it was making the change because it needs to comply with more stringent air pollution rules that take effect by 2019. And that may in turn be credited to the administration of President Barack Obama: in March 2011, the U.S. EPA proposed new standards for the regulation of toxins from coal-and oil-fired power plants, which will require significant reductions in emissions.

The Madison-based Center for Investigative Journalism did a well-reported story on the state’s coal powered plants which found the boilers they used go back to the 1950s, 1940s, even as far back as 1927 at the J.P. Pulliam plant in the Green Bay area. The Columbia Energy Center in Pardeeville, owned by the Madison-based company Alliant, emits the most total particulates and the most mercury.

“Older plants tend to have the fewest pollution controls, and as a result have more emissions per amount of electricity generated,” David MacIntosh, a Harvard University adjunct associate professor of environmental health, told the publication. “That’s one reason, from a public health perspective, why it’s important to focus on these.”

The story noted a 2010 study by the Boston-based Clean Air Task Force which estimated that emissions from Wisconsin power plants cause about 268 deaths, 201 hospital admissions and 456 heart attacks annually.

Former Democratic Gov. Jim Doyle’s administration promised to study ways to lower emissions at the state’s 15 coal-burning plants at UW campuses, prisons and other state buildings, resulting in the retrofit or shuttering of some of the facilities. But that effort ended under Republican Gov. Scott Walker, the story noted.

Alliant and We Energies also own coal-powered plants in other states. The We Energies plant in northern Michigan was ranked as one of the 100 worst in the nation by the NAACP study, but Manthey says the company plans to install updated emission controls at that plant as well. Alliant’s plant in Marshalltown, Iowa, was also rated one of the nation’s worst 100 offenders by the NAACP.

And the American companies running these coal plants typically enjoy high profits and chief executive pay. On average, the NAACP study found, the CEOs at these companies were compensated at 289 times the rate of compensation for their average U.S. employee.

Clarification: The comments from We Energies were not included in an earlier version of the story as I missed an email from Manthey. My apologies.

–Marc Eisen did an interesting column for Isthmus arguing that Democrats need a business-friendly progressive in the mold of 1970s governor Pat Lucey. That in turn provoked an attack from some angry lefty Madison blog called “Forward Lookout” which called Eisen a “hack journalist,” apparently because he’s not liberal enough.

Eisen was my boss in the two years I worked for Isthmus in the 1980s and then did some stories for me when I was an editor at Milwaukee Magazine. He’s a respected commentator of long standing with a thorough knowledge of Wisconsin political history. I don’t know if I completely agree with his column; Lucey’s cuts in business taxes made sense back then but its probably not the solution needed now when many corporations pay no taxes. But the central idea that Democrats need to create their own road map to more jobs and economic development is soundly argued. Eisen, I’m sure, would welcome such disagreements, but the screed by Forward Lookout instead offers the worst sort of politically-correct intolerance.

-One economic development platform that should be part of any Democrat’s road map is alternative energy. Gov. Scott Walker has cut back investments in wind energy and solar energy, which create jobs in Wisconsin and protect the environment of a state that depends on tourism. Instead, he is relying more on fossil fuels, which generate jobs elsewhere (for oil and coal-producing states) and pollute a state that advertises itself as a vacation paradise.

-Is Wisconsin still a swing state for presidential elections, given that a Republican hasn’t won here since 1984? The always interesting poll analyst Nate Silver did a story that measures the “elasticity” of states: how likely they are to switch from Republican to Democrat and vice-versa. The District of Columbia is least elastic, with a score of 0.45; New Hampshire is the most elastic, with a score of 1.27. (The national average is 1.00) Wisconsin’s score of 1.10 makes it more elastic than all but 14 states and tied with one (South Dakota, believe it or not.) We’re still a swinger, but not perhaps as much as advertised, as the recent election proved.