“It Will Always Be Here”

The colorful history and enduring legacy of Vitucci's cocktail lounge. 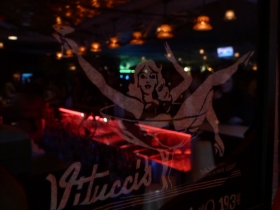 Frank Vitucci never drank. When his customers wanted to buy him a drink, he’d say, “No, buy me a cigar, I’ll smoke it later.” He would pocket it. By closing time, he’d have a handful of cigars to put back on his shelf. Nor could you buy him a Coke—he simply didn’t allow its products near Vitucci’s. Coke was a big supporter of Prohibition at the time and, therefore, was the enemy. These stories are how Frank’s grandson, Myron Vitucci Jr., remembers his grandfather.

During Prohibition, in the early 30s, Frank ran a “soda parlor” where the Eastsider pub stands today at 1732 E. North Ave. During a 2012 remodel at Vitucci’s, a recipe for “Frank’s Tea”—a potent drink a bit like a Long Island—was found in the margin of an old sports almanac. It’s rumored that in those days, many an Eastsider enjoyed a spot of “tea” at Frank’s after a day’s work. In 1932 and ’33, the grip of Prohibition began to loosen, and it became legal to sell beer. In 1934, Prohibition was fully repealed, and Frank moved his business one block west, to where Vitucci’s still stands today. Nearly 80 years later, Frank’s grandchildren still run the place.

Myron Jr., 50, is one the four owners today. He says that working at the bar comes naturally for family members. “It gets in your blood,” he says.

Jim Draeger, co-author of the book, “Bottoms Up: A Toast to Wisconsin’s Historic Bars and Breweries,” explains that most bars in Wisconsin’s history have been family run. Since labor is the biggest operational cost for taverns, everyone in the family can have a job and benefit from the business.

Today, Vitucci family members are involved in management and ownership of the bar, but local young people are employed for bartending and other tasks. This staff relates well to the energetic college-age clientele that dominate peak bar times, but Vitucci’s still prides itself on making everyone feel like family. A recent remodel has given the bar a chic and spacious atmosphere. During the day, large windows fill the bar with sunshine, and at bar time they let in the glow of North Avenue’s festive nightlife.

Growing up in the Vitucci family, it was likely you helped with cleaning or kitchen duties. Many family members fondly remember the “bottle chute.” In the past, breweries reclaimed empty beer bottles like a milkman would. The chute was a metal tube behind the bar where empty bottles were thrown to be collected in a bin at the lower level. Every day, a Vitucci kid would reload 20 to 40 cases of empties for the “beer guys” to reclaim.

Vitucci’s sold local beer: Pabst, Miller, but especially Schlitz. Myron thinks Vitucci’s at one point may have sold more Schlitz than any bar in town. Vitucci’s drew in many Schlitz employees, as well as workers from the A.C. Spark Plug Division of General Motors Corp. (today’s Kenilworth Square Apartments) and Wisconsin Paperboard Corp., which still stands along the Milwaukee River northwest of Vitucci’s. Myron Jr. says his grandfather Frank was a bit of a “barker.” He would sit outside his bar and convince the locals to come in and have a drink.

“These corner bars had a much closer clientele, strengthening the social ties of people in the neighborhood and creating a strong sense of belonging,” Draeger explains.

Myron Jr. says that’s still the goal at Vitucci’s. “Even though we’re in this metropolitan entertainment district sort of thing, that’s always been our philosophy. We’re a neighborhood bar.”

Travis Walsh and Deanna Lowther are two of the many young locals here; They’ve been loyal regulars for several years. Says Lowther, “It just feels like home.”  Says Walsh, “It’s kind of like Cheers, you know? Where everybody knows your name.”

“If taverns are family-run, they foster a stronger sense of community, since loyal customers became by extension an honorary part of the family,” Draeger says.

Myron Jr. remembers bartending one New Year’s Eve in 1988.  A couple came into Vitucci’s early in the night, gray-haired, in their 80s, and “four-foot-nothing,” as he puts it. As Myron chatted with them, the husband revealed that the couple had met at Vitucci’s in 1936, half a century prior.

Myron has heard from hundreds of couples that met at Vitucci’s. Whether it’s a teacher, a plumber, or a cop writing him a ticket, people hear the name “Vitucci” and tell him, “Oh, I used to go there!”

Yet Vitucci’s has continued to change, with many “reincarnations,” as Myron Jr. puts it. Its first focus was Italian food and traditional cocktails when it started in 1934, and continuing through the ’40s. Frank’s wife Anna Marie would cook authentic spaghetti, pizza, ravioli and lasagna.

Vitucci’s 1950s remodel added the back room, the 50s-style awning and façade that still remains, and a new focus as a steakhouse. The back room was the main dining room, filled with the savory smell of steak sizzling on a charcoal grill. Today, it holds a second bar and a dance floor where 20-somethings bump, grind, and breakdance to club music. Bar-goers can still see the brick grill adjacent to the back bar, and the steakhouse menu still hangs on the wall in the front room.

In the 1960s, Vitucci’s started serving as an “early sports bar.” They would sell package deals: a Packers ticket, steak dinner, and beer-on-the-bus ride over to County Stadium, for example. The ’60s also brought the first female bartenders.

Frank died in 1968, and Anna Marie a short time later. They left behind 12 children and Vitucci’s had to close for over a year as the couple’s will was processed in the courts. Myron says it was a difficult time, but things have only improved since then. The bar was left to four of the six brothers: Angelo, Michael, Myron Sr., and Frank (who recently passed away; he was the son of founder Frank and father of current manager Frank).

“When people die, people get crazy,” Myron observes. “Normally, that’s what splits families apart—when grandma dies and somebody got grandma’s dresser and somebody else didn’t. We’ve learned that if you argue, all you do is you end up giving money to lawyers. You better just talk it out.”

In the 1970s, Myron Sr. and his brother Angelo worked Vitucci’s the most. Myron manned the kitchen (“he was a cook, not a chef,” his son explains) and Angelo tended bar. Myron Jr. remembers his dad’s chili and a cheeseburger that was truly Italian-American: a patty topped with melted American cheese and a massive slice of deli mozzarella. At this point, the neighborhood was filling fast with UW-Milwaukee students. Vitucci’s started hosting bands in the ’70s and ’80s to appeal to the young people: “all that new music,” as Myron Jr. puts it. Customers would pay a $1 or $2 cover to see three bands.

Vitucci’s has always tried to have family members in charge who can relate to the current clientele. Myron Jr.’s cousin Frank Vitucci, 30, has been general manager since 2007. He’s young enough to relate to the college community, but his roots still run deep. He remembers when he and his father Frank would visit his uncle Angelo at the bar. There was the sound of Cubs day games or Notre Dame football being broadcast, and always that familiar smell of Vitucci’s—something like a cedar cigar box. Frank says that when he faces tough times, he can keep his head up knowing his father and uncles likely faced the same problems.

Since the 2012 remodel, that familiar cigar box smell has left Vitucci’s. “It’s all different now. We’re starting a new chapter in this journey,” Frank says.

College students are their main clientele nowadays, and recent changes reflect that: more space to dance, events that appeal to a younger crowd. But earlier in the day, older customers still come into Vitucci’s and enjoy what the bar has to offer, including their selection of wine. The Vituccis still want everyone to feel at home, to maintain their status as “neighborhood bar.”

“At a time when many people lived in small houses, apartments and tenements, the tavern served as an extended living room; a gathering place for neighbors, family, and friends,” Draeger says. “In an urban college community, much of this is still true today.”

Myron Jr. is pleased with how the North Ave. area has changed: “I get excited every time I come down there.  The neighborhood itself has just blossomed. UWM has just pumped a ton of money into the area. They’ve essentially made North Ave. the southern end of their campus.”

Ownership is diluted across four hands today: brothers Myron Jr. and Michael, and their sibling cousins Tony and Angela. Myron says no one has a desire to sell. Potential plans include building a beer garden, expanding into the large space above the bar, and bringing back live bands like in the 1970s and ’80s.

Business at Vitucci’s has been improving since Frank started managing. He describes Vitucci’s as a “Vitucci school” where many family members come to work for a while, learn the ropes, and eventually go on to have families or pursue other projects. All the previous generations of Vituccis have had their fun here: celebrations, friends, holidays, and drinks enjoyed.

“Everybody’s time kinda comes and goes,” Frank says. “But the bar… you know, no one’s bigger than the bar. It will always be here.”

One thought on “Taverns: “It Will Always Be Here””