A modern Flower Child uses her artistry to rediscover the lost culture in abandoned city lots.

In July, Sarah Gail Luther lost many of her drawings and paper sculptures in the Center Street fire, in the building where she maintained a studio. “But I’ve landed in a better place,” she smiles “My studio is now in my Riverwest apartment. It’s simpler; it’s easier. While working on my installation for the Mary Nohl Fellowship for Individual Artists exhibition at Inova, I discovered I could make my work just as well at home.”

Luther was one of seven winning artists selected from a field of 130 hopeful applicants. The Nohl grant came with no strings attached, but Sarah spent most of her $5,000 on supplies for the Fellowship exhibition (running through December 9), where she brought what she calls the “outside urban landscape” into the UW-Milwaukee space known as Inova on Kenilworth.

The idea for her Nohl project was rooted in the summer of 2012, when she selected five vacant plots and researched them at the Milwaukee County Historical Society. It involved laborious searches through old Milwaukee telephone directories, trying to figure out what occupied the plots of land once upon a time. She then addressed these with a conceptual art project that did not require the city’s permission because it was “only temporary,” officials told her. 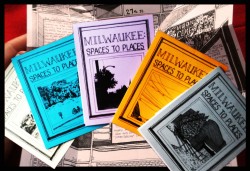 Milwaukee: Spaces to Places. Photo by Andrew Swat and Heidi Erstad and composed by Grace Fuhr.

It’s easy to imagine Sarah as a Flower Child (she’s 26): she plucked blossoms from the abandoned plots, and then distributed the bouquets in populated locations. “It was a way to start conversations and hand out the maps I had made. They advocate for people to return to the plot of land and use it as a park, or see it as a space with potential rather than a nuisance or scar.”

As Luther talks, she unfolds a small map of her drawings and text detailing the demise of a once vigorous neighborhood around 37th & North. The map is a kind of “portable grave marker,” a memorial to Nicholas G. Avgoulas Billiards, Schultze’s Meat Market, Schneil Gift & Greeting Card Store, a barber shop run by one Norman Thiel, places that sold  burgers, rubber gadgets, carpets and neon signs. By the 1990s, most of these shops were vacant and many were torn down.

On the flip side of her handy Spaces To Places guide, she says, “I am not claiming to know or understand these neighborhoods. In fact, it’s almost the opposite. They are places I rarely go…I want to keep reminding myself that this city is a resource to utilize and participate in.” Her art also informs, offering contact numbers for block party permits, community gardens and large trash and/or brush pick up.

Additionally, her map references a 1992 Milwaukee Journal article reporting that the aforementioned area was controlled by gangs. Abandoned houses come along with abandoned plots, and abandoned hopes. 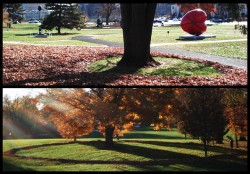 Photo by Andrew Swat and Heidi Erstad and composed by Grace Fuhr.

Her Inova show includes her map of the abandoned lots, a full-scale telephone pole and blue Post Office mailbox, the green wooden flower cart from which she distributes the Queen Anne’s Lace, hand-drawn “field guides” and postcards with drawings of homes and streets in these neglected neighborhoods.

In her review of the show, Milwaukee Journal Sentinel critic Mary Louise Schumacher wrote that Luther “seems to believe philosophically in the power of community and art to occupy and knit back together the things broken up by streets, freeways, bodies of water, social habit and misunderstanding… Ultimately there is subtle and gentle critique here. But with Luther’s curiosity as the driving form of expression, it is more about inquiry than finger waving.”

Luther also calls herself a “free lance gardner” and after graduating in 2004 from Wauwatosa East High School, she headed for four years at the Art Institute of Kansas City, taking  her gardening instincts with her. “As a junior at the Art Institute, I would visit parks in the fall and rake leaves into various configurations at the base of trees. Actually I did this because I needed exercise. Anyway, people came by and said, “We can’t believe you are raking leaves; nobody does that anymore.”

During this time, on a long lovely Kansas City boulevard near the Art Institute, a local gallery cut a deal with Kansas City, and — shazaam! — what should appear in the formerly beautiful space but a perfectly hideous metal sculpture. (Author’s note: During a visit to Kansas City, I saw the public art and yes it was hideous and thankfully, temporary.) Sarah got busy with her rake, and soon the leaves on the boulevard were shaped to create a kind of natural public art that wasn’t big and made of shiny metal.

A seasonal rhythm nurtures her selfhood. “In the summer I make art; in the dark months I read and conceptualize. When we talked to her, Luther was about to depart for an art residency in Los Angeles and said she’d likely be reading about transportation issues. Currently, she’s reading “Trash.” It’s all about “artists and writers investigating the proposition that we are what we throw away.”

Because she doesn’t create work for galleries per se, she’s challenged by the concept of bringing outside ideas inside. She knew before the Nohl exhibition, that she couldn’t just bring a map into Inova and say to visitors, “take one.” Nor could she make a document of her on-site work and hang it on the walls. ‘Boring!” she says.

And Sarah Gail Luther is anything but that.