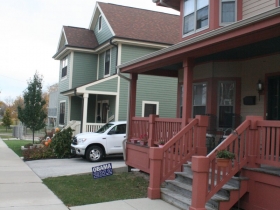 When 22-year old Marina Dimitrijevic was elected to the Milwaukee County Board in 2004, her current Bay View homesite was no more than a patch of dirt down the road a pace from an old Union Hall tavern. It wasn’t until 2006 that the structure on St. Clair St. was built; Dimitrijevic bought the single family home for $280,000 in March 2007. She is listed as co-owner with Benjamin D. Perales, who shares with her its 1872 square feet of enchantment.

A full 951 square-foot basement is made of poured concrete with a faux-brick pattern, a curbside giveaway of the home’s recent vintage, despite its traditional appearance, with each of its two levels offering 936 square feet of carefree living space. Why, it is almost as if a Brewer’s Hill infill home had decided to escape to the other side!

The dwelling has three bedrooms and two full baths. A detached two car garage that looks like it was trying to find Cudahy but lost its way sits tight on the rear of the lot, shadowed by the elevated Lake Parkway immediately behind it. The landscape of the home is observed in the breach with a rear yard vegetable plot providing the only variety among a carpet of lawn that verdantly surrounds a structure that is so much a part of its neighborhood, yet then again is so much more.

This home generated $7,021.44 in property taxes last year, with every penny of the sum paid in full, including $1607.52 in county taxes, enough to pay Dimitrijevic’s salary for better than a week.

The home has a Walk Score of 82, which is very respectable, but has a Transit Score of 45.

Transit Score apparently doesn’t factor in close availability of ferryboats when it comes to grading Bay View, which is a shame, since the Lake Express Ferry is just a hop, skip and a jump away. I bet they don’t treat Seattle that way!

Perhaps Dimitrijevic can do something about the lack of recognition of the ferry’s proximity to her home, and the lack of rail access to it, in her new position as Vice Chair of the National Association of Counties, to which she was appointed this month.

Fun Fact: The Dimitrijevic home is built on one of four parcels at one time owned by New Urban Builders, which constructed her home and one adjacent to it. Two other buildable lots remain and are available from the owner, Rick Macek.

How Milwaukee Is It? The house is 3.8 miles from Milwaukee City Hall.

Dimitrijevic was the youngest woman ever elected to the county board when she took her seat. She made early alliances with community groups by holding frequent town hall meetings, and actively enlisted candidates for board seats. The Progressive Majority organization, which recruits Democratic party candidates nationwide, says  “Marina is a rising star in Milwaukee politics and is committed to building a movement of young progressives.”

As board chair, she has accused County Executive Chris Abele of providing “more of the same” in his budget request.

As she wrote in a Milwaukee Journal Sentinel op-ed piece in early October:

“We’ve been down this road many times: The county executive takes credit for keeping taxes low while forcing the County Board to do the heavy lifting of finding creative, balanced funding sources.” 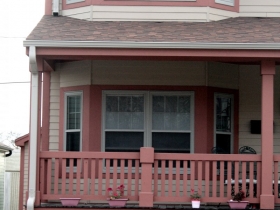 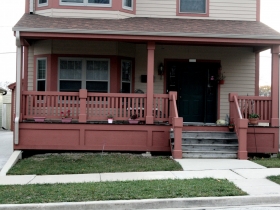 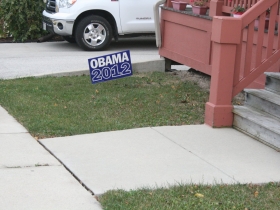 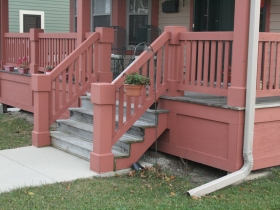 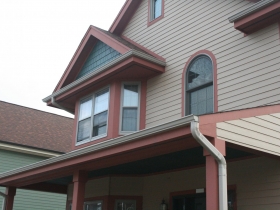