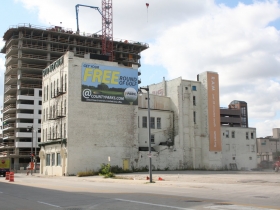 The spirit of the meeting was captured by Sup. Patricia Jursik’s warning to her fellow board members: “There’s going to be money left on the table, if we don’t get moving on this because of the bonds.”

And sure enough, Supervisor Patricia Jursik and fellow members of the Milwaukee County Economic and Community Development Committee rushed through a resolution that directs the Director of Economic Development to begin negotiating a land sale in the Park East. The committee met in a special meeting today, and Jursik pushed for quick action because of the possibility of the development using Midwest Disaster Relief Bonds to finance the project: the deadline for using them is Dec 31st, 2012.

The development would occur on a 0.8 acre parcel located on the west side of Old World Third Street between W. Juneau Ave. and W. McKinley Ave.,  just north of the former Sydney Hih site. A group called MRH West LLC, an affiliate of Milwaukee River Hotel LLC, which was the developer and owner of the Aloft Hotel, plans to build a 110 room, possibly LEED-certified extended-stay hotel under the Element Hotel flag.

When asked about his knowledge of the project, Brian Taffora, the county’s Director of Economic Development, responded, “I know about as much as you know about this…the project hasn’t been vetted yet.”  Taffora added, “I haven’t been able to talk to the city yet,” meaning there could still be zoning issues and the like that might arise. Then there’s the question of whether County Executive Chris Abele will support the project, but Taffora said he thought Abele would.

Doug Nysse, the project architect and Principal with Kahler Slater, suggested the building would be “5 or 6 floors probably,” and that “potentially there is space on the first floor for retail.”   According to Nysse the site arrangement would probably be similar to the Aloft, and would have two open spaces on each side of the building, due to a Milwaukee Metropolitan Sewerage District easement that bars development of a portion of the site.  No renderings were presented during the meeting for committee members to take into consideration (though images of typical Element Hotel designs can be found here).

There was some discussion regarding the process and the fact that there was no current RFP for this proposal. Sup. Michael Mayo weighed in, saying, “I do prefer RFP,” but Jursik shot down that line of discussion:  “We have done the RFP,” she noted, but “at this point it hasn’t been fruitful.”

The resolution was unanimously approved, and will now go before the full county board.

8 thoughts on “Rush to Judgement”