The Department of Transportation flagrantly ignored federal law and the rights of urban minorities.

By Gretchen Schuldt, Wisconsin Justice Initiative - Sep 13th, 2012 01:22 pm
Get a daily rundown of the top stories on Urban Milwaukee 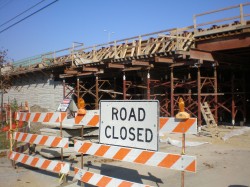 The recent report by the Federal Highway Administration’s Office of Civil Rights on Wisconsin’s failure to comply with Title VI of federal laws is both painful and painfully funny to read. How could a state agency fail in so many ways? The feds publish plenty of guidance and Title VI is not exactly an obscure statute.

Title VI prohibits discrimination on the grounds of race, color, or national origin under any program receiving federal funding. In the transportation area, it is supposed to ensure that protected groups share the benefits of transportation projects and do not shoulder a disproportionate burdens of those projects. Title VI is a really big deal.

The federal report details the many ways Wisconsin ignored the law. Wisconsin’s Department of Transportation assigned duties related to Title VI to an administrative area that no longer exists, the report notes.   As a result, “it is not apparent as to how WisDOT will be implementing Title VI/Nondiscrimination requirements.”

The feds found that key WisDOT employees did not have even a basic understanding of Title VI. They “consistently” said they understood Title VI to be about WisDOT employment diversity, contracting diversity and disadvantaged and small business opportunities. Those things, though, “do not constitute Title VI/Nondiscrimination requirements,” the report said.

And when the law did come up at WisDOT, it came up very quietly. The agency liked to keep such issues to itself, according to the federal report. Written records that might become public? Nawww.

Title VI matters were discussed at “impromptu meetings held bi-weekly or monthly at which issues of any description (including Title VI/Nondiscrimination issues) are introduced and addressed,” the report said. “There are no Meeting Agendas and Meeting Minutes maintained to document the outcomes of these meetings.”

WisDOT didn’t have a Title VI training program for its employees and some reported getting absolutely no training in the law’s requirements, according to the report.

WisDOT spokeswoman Peg Schmitt, in an abysmal attempt at spin control, told the Journal Sentinel that the OCR’s investigation was “routine” and the department was now in compliance with federal requirements.

Maybe. But the OCR’s finding that WisDOT was deficient in fulfilling its Title VI obligations was hardly routine.

“I think it’s extremely rare for a federal agency to find a recipient of federal funding – especially a state agency – deficient in its civil rights compliance,” said Karyn Rotker, a lawyer with the American Civil Liberties Union of Wisconsin. Rotker, along with environmental attorney Dennis Grzezinski and Patricia McManus, executive director of the Black Health Coalition of Wisconsin Inc., brought WisDOT’s Title VI problems to the feds’ attention.

WisDOT, now busted, says it will finally do what it should have been doing all along. The ACLU will be watching.

“We do want to make sure that any corrections/remedies are meaningful – not just paperwork or pro forma,” Rotker said.

WisDOT’s abysmal civil rights performance occurred during the time (under both Democratic and Republican governors) it was pushing for bigger freeways in Milwaukee amidst oft-raised concerns that poorer, transit-dependent city residents were bearing too much of the projects’ burdens. Among the issues raised were the impact of expressway expansion in city neighborhoods, and the inadequate funding for public transit for the many people who lack an auto. Those concerns were rejected.

Gretchen Schuldt is a senior contributing writer for UrbanMilwaukee.com.