Hauling Pecks and Pounds by Bike

Cargo bikes can move just about anything, including groceries.

By Dave Schlabowske, Bike Federation of Wisconsin - Aug 14th, 2012 09:00 am
Get a daily rundown of the top stories on Urban Milwaukee 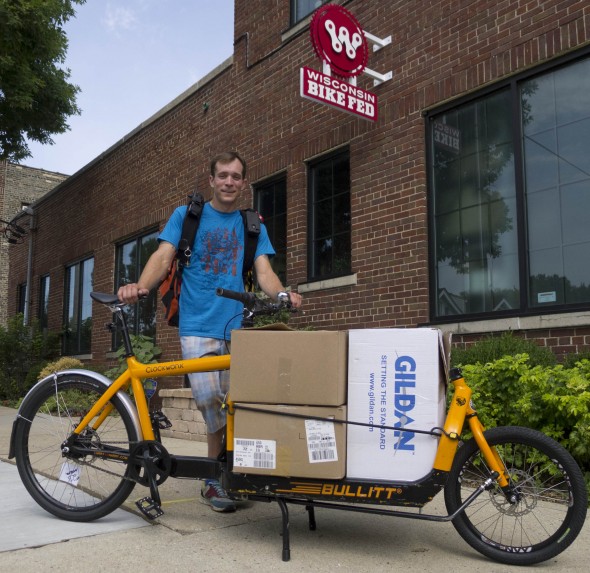 Stephen and the Bullitt from Breakaway delivering 300 new Forward Wisconsin shirts to the Bike Fed office at 3618 W.Pierce St.

Recently, Breakaway delivered three big boxes of shirts to the Wisconsin Bike Fed’s Milwaukee office with their Harry vs Larry Bullitt cargo bike. Only a few years ago, european bakfiets (box bikes) and other cargo bikes were rare and hard to find in Milwaukee.  Lately it seems like every time I turn the corner round, someone is pedaling past on a long john, trike or long tail. 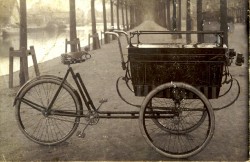 A photo of an early 1900s Bergreijer bakfiets.

Breakaway’s Danish Bullitt is Harry vs Larry’s modern, faster, lighter take on the traditional Dutch Bakfiets cargo bicycle. Bakfiets have been around since the very early 1900s and probably invented by the Dutch. I say probably, because it is hard to say anyone actually invented something as basic as a box on a bicycle, but the Bergreijer bike shop in seems to have as strong a take as anyone at the title based on this article from Bakfiets en Meer. 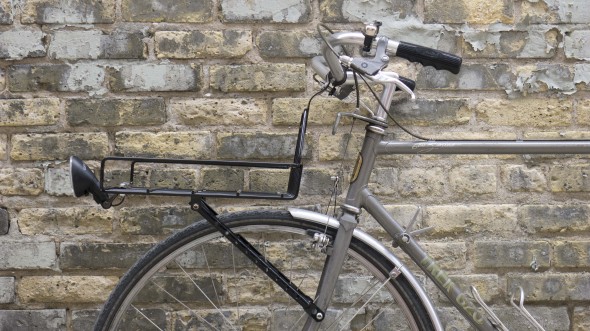 The Wald 257GB was sized so a 20 inch pizza box fits perfectly (as does a peck of blueberries). 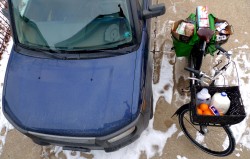 With her heavy duty frame-mounted front and rear racks, Oma can carry week’s worth of groceries for our 3-person family just as easily as our Honda Element.

I own 13 bikes, but have yet to add a true cargo bike to my stable. I have a Dutch Omafiets by Workcycles that has a frame-mounted front rack and sturdy steel rear rack. It is a real beast of burden, but no bakfiets.

I use Oma for most weekly grocery trips, but I have racks on my other commuter bikes for lighter hauls. Later, after Breakaway delivered the t-shirts to our office, I pedaled the four miles over to the West Allis Farmers market to pick up a peck of blueberries and some other produce over my lunch break.  The recently added Wald 257 GB front rack on my 1986 Trek 620 was ideal for hauling the berries. I filled my rear panniers with carrots, kohlrabi, cantaloupe, summer apples and tomatoes.

For some reason, Wald does not have the 257 front rack on their website, but I had no trouble buying mine from Ben’s Cycle a couple weeks ago. In fact, they had two in stock.

Installation was easy, but I took the extra step to bend the handlebar bracket on the rack so it sits lower and further back on my bike. This also allowed me to mount it to the fork low-rider rack mounts with one leg each side, rather than the telescoping two per side that come with the kit.  Because the rack mounts to the fork, unlike the frame mounted front rack on our family Workcycles Omafiets, it affects the steering under load.  I much prefer frame mounted racks, but have not had the time to bend and braze one up for my commuter bikes yet. So, until I add a bakfiets to my stable, I reserve truly heavy loads for Oma or sometimes our Burley trailer.

I can’t wait to go pick up a Jim Bob and a Nikki-Knack from Cranky Al’s (my neighborhood bakery for donuts and ‘za).  The rack seems so perfect for delivering pizza, I’m thinking about quitting my job at the Bike Fed and going to work for Flavorcycle West. Liz, is that OK with you?

3 thoughts on “Bike Czar: Hauling Pecks and Pounds by Bike”