Although officially in San Diego to attend the 2012 Esri User Conference (fancy digital mapping stuff), I took some time to also get to know the city a bit, particularly its signature public space, Balboa Park, as well as a smattering of smaller spaces and pedestrian amenities scattered throughout the Little Italy and downtown neighborhoods. In the way of context, the density and composition of much of the infill observed ranged from structures reminiscent of Milwaukeeʼs Historic Third Ward – three to five stories, mixed-use – to more significant 10-30 story highrises. One notable stylistic exception would be the preponderance of this cityʼs climate appropriate stucco and more modern design flares, including one particular striking steel and stone building I came across featuring a subtle mosaic distributed across its staggered balconies. 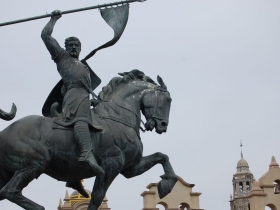 As regards public space proper, located just north of San Diegoʼs downtown is Balboa Park, which occupies an impressive 1200 acres of real-estate in this booming seaside city. In its central western portion (Iʼll admit that I only had time to explore this small quadrant), one finds an impressive collection of Spanish Colonial Revival buildings laid out along a central promenade known as El Prado and home to a plethora of museums, cultural institutions, fountains, and statues. This, taken together with the arid, jutting terrain and temperate climate, results in a space strongly reminiscent of the Ibero- American Exposition Grounds in Seville, Spain (there is even a replica of Sevilleʼs El Cid Statue). It is difficult to imagine a space of this scale and one boasting a comparable mix of amenities in Milwaukee – it is of course the product of a different cultural milieu – but a hypothetical equivalent might be something like a Kosciuszko or Humboldt Park housing the Museum of Natural History, Milwaukee Art Museum, Science Museum, etc, all together along a handsomely laid out and furnished central axis. This is not to suggest that Milwaukee has somehow missed the mark with the siting of these spaces, but only to give readers unfamiliar with Balboa Park a sense of what it is about.

Perhaps San Diegoʼs signature “public amenity,” however, is the cityʼs impressive trolley system. Running in a dedicated right-of-way and comprised of three primary, colorcoded lines, the system offers insight into the way in a which a properly executed mass transit system can not only enhance mobility, but can go further by greatly enhancing the public realm through its network of stations and adjacent amenities, such as bike paths and squares. The stations themselves become focal points for local commerce and activity, giving form to an otherwise diffuse urban fabric and in the process also serving as a prominent wayfinding device for visitors (itʼs hard to get lost when you can simply follow a lineʼs rails and cables to the next station). Among the systemʼs transfer points, the America Plaza offers a particularly compelling model of what might be aspired to here at home. Open, airy, and tightly integrated into the surrounding street network, the space stands not in contrast to the area outside, but compliments and enhances it, offering a gracefully curving path that results in a diagonal shortcut across the block it occupies that is inviting and attractive. Likewise, rather than severing the pedestrian connection, track crossing points throughout the city are comfortable and accessible, acting as tidy seems. This cannot be said of the cityʼs larger automotive arteries, such as Harbor Driver, that sever San Diego from its gorgeous waterfront both visually and physically. 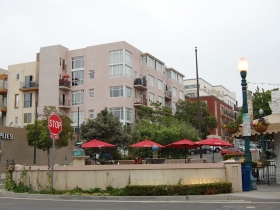 Finally, the cityʼs Little Italy offers an instructive model of balanced public-realm design at the street level. Replete with ample sidewalks, bump-outs with public furniture, and a couple of quirky, yet deftly utilized traffic calming/public park amenities, thereʼs plenty to like. My favorite was a large bumpout occupying approximately one corner of an intersection – essentially a larger “chocker” – that included a small fountain and circular stone benches. Apart from providing a place sheltered from the flow of traffic, this space also works to enforce the transition between the two-way and one-way lengths of this east-west street. The result is an amenity that functions on both a traffic engineering and public space level. Pleasantly practical.

As a first time visitor to the city, the transition from my airport-adjacent motel to the convention center located downtown was seamless, intuitive, and a real delight. Thereʼs no denying that the cityʼs modern trolley system had a large role to play in setting the tone of that experience, as did its litany of thoughtful public space amenities, only a few of which have been mentioned here. There are a number of lessons to be taken away. Indeed, the optimist in me sees good things in store for Milwaukee should a resolution ever be reached regarding the current utilities debacle and resulting streetcar impasse here at home. Perhaps nothing new or groundbreaking, but a reminder of what could be achieved here in Milwaukee. 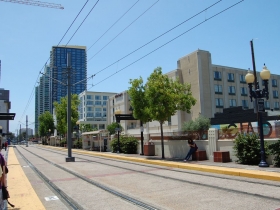 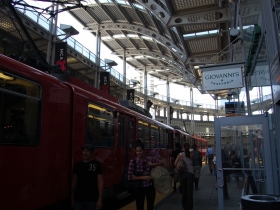 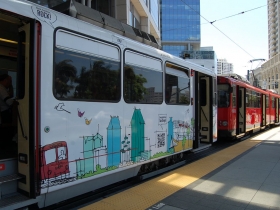 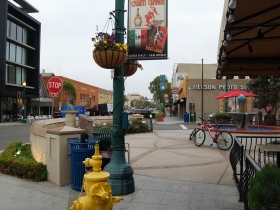 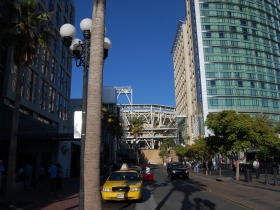