How Milwaukee got its first cheese-making factory. 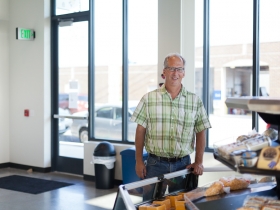 There is a reason why the Clock Shadow Creamery stands where it is and why Bob Wills is its owner.

Wills certainly hadn’t planned to become a cheese maker. For years, he held a series of jobs that mostly involved research — as an agricultural economist, as a lawyer.  “I would write papers and they would end up in people’s garbage cans,” Wills says.  The work was very theoretical and hard to measure, nowhere near the down-to-earth job as a janitor he had as a young man. “Looking back, in some ways it was my favorite job because I could see what I accomplished.”

In 1989, seeking a change in his life, Wills bought the Cedar Grove Cheese factory in Plain, WI., from his in-laws.  It was rewarding work — anything but theoretical. “One of the things I liked about the cheese business is, at the end of the day, I could eat what I had made and I would get feedback from people and it made them happy.”

Still, it was not an easy journey, trying to learn the cheese-making business while farms that supplied the milk and other cheese factories were going out of business left and right.  Wills wasn’t sure he was going to make it. “The first few years were tough.”

When he bought the business, 90% of the product went to one customer. Wills worked to diversify the business and reach out to more customers.  He made considerable progress, but still sold 60 percent of his product to just one company, which dropped Wills just when the market for cheese had declined. But as luck would have it, his wife made a cold call to Swiss Colony around that time and they agreed to take on the entire inventory of cheese the old client had been buying.

But Swiss Colony had one proviso. They wanted Wills to begin making some specialty cheeses. It was a pivotal moment, and pushed Wills more into making artisanal cheese.

Wills also credits his survival in the business to help from the Specialty Cheese Institute, an organization founded in 1994, which became a way for artisanal cheese-makers to network and share their knowledge.  Also helpful was the Dairy Business Innovation Center, a non-profit made possible through federal funding.  This group’s assistance helped stabilize the struggling cheese making industry. “They were involved in some 70 expansions and 43 to 44 new plants,” Wills says.

It was the Center that pointed Wills back to Milwaukee, his home town. “They heard about this project (the Clock Shadow Building being developed on 2nd and Walker) and indirectly got me going on this and provided additional resources.”

Once again, it was a chance for Wills to have a down-to-earth impact on people’s lives. “This is a neighborhood that’s got good restaurants, but there’s no real grocery store so it’s a hard area for people to get good food,” Wills notes. “So we’re going to expand our food offerings so we can provide more produce.”

His cheese will also serve a diverse neighborhood with many low-income and Hispanic residents. “There are two other cheese factories in the country in cities but they’re targeting upscale neighborhoods and they’re fancy cheese stores,” Wills notes. “What I liked about this is that it’s serving a different kind of community and a different need.”

Hispanic cheeses such as casillo and queso blanco are likely to be produced, Wills says. Other items on sale include cheese curds, the essence of simple Wisconsin eating, chevre (a goat cheese), fresh mozzarella and a German/northern European soft cheese called quark — a kind of cross between sour cream and cream cheese that is close to yogurt in flavor. Wills may also sell brie and water buffalo mozzarella.

Clock Shadow Creamery had its grand opening June 21 and is already becoming a neighborhood institution.  Although the milk comes from several farms within a 150-mile radius, the bacteria comes from a local company here in Milwaukee, and the cheese is made at the factory in Walker’s Point for everyone to see.  And it can be delivered the same day it is made to local grocery stores and restaurants, unlike the cheese from his factory in Plain. If you visit in the near future, you might be lucky enough to try a water buffalo mozzarella paired with tomatoes and basil grown on the rooftop of the Clock Shadow building.

Education is also a focus of the company. The day I visited, a group of school children were visiting the factory and learning how cheese is made.  The company also has interns learning the business, often working alongside younger cheese makers, who have the freedom and drive to experiment and try new things, Wills stresses.

Not that he doesn’t hire more seasoned cheese makers. Wills recalls one of his old cheese-makers, with 54 years experience, and known by his peers as something of a magician, because of his intuitive knowledge of the unending variables that affect the outcome of cheese — from what the cows eat to weather patterns to the chemical and biological intricacies in making cheese. “In the end he could hardly see,” Wills recalls, “but when he walked in the room, he could tell by smell what the cows had been eating.”

The new business is a big commitment for Wills, involving long hours at the creamery and a two-hour commute from Plain. But he loves the way it connects to people.

As he puts it, “I don’t want to be an upscale yuppy cheese shop.  That doesn’t give me pleasure.  But being able to provide good, healthy food for people who don’t have it, jobs where they’re needed, and knowledge about the career possibilities in cheese making does.”

Which, in the end, is why the factory is located where it is.  “If it works here,” Wills says,  “it should work anywhere.” 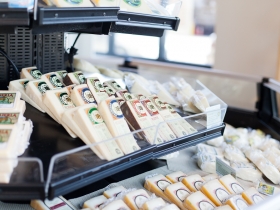 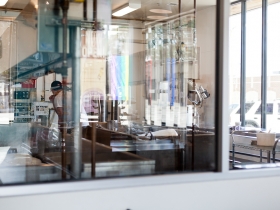 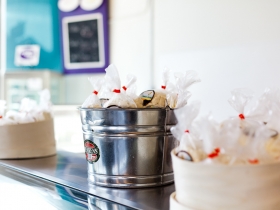 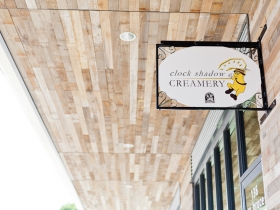 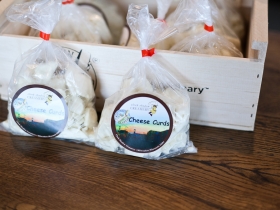