Preliminary renderings of what a restored Sydney HIH complex surface. 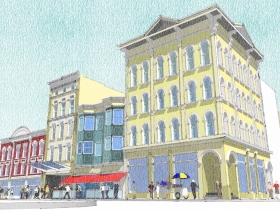 The Sydney HIH complex has been fast approaching its last day, unless an effort by local developer John Raettig and his firm Raettig Redevelopment can be explored.

At the June 26th meeting of the Zoning, Neighborhoods & Development Committee (ZND), the committee voted in favor of  the Milwaukee Economic Development Corporation’s (MEDC) appeal of the Historic Preservation Commission’s June 7th, 2012 action to designate the complex as historic.  The committee vote set the stage for this upcoming Friday’s meeting of the Common Council. If the full council were to uphold the vote, it would clear the way for the City of Milwaukee to move forward on the complex’s demolition.

During the appeal process at the ZND meeting, Ald. Terry Witkowski stated  “if there was some savior” for the buildings that they would have already come forward.  Maybe not.  It now appears that a proposal has surfaced to save the complex.

During the meeting Raettig, who is responsible for the redevelopment of the Johnson Bank building (portion of the Follansbee Block) and the Cawker Building, spoke about the impacts of demolishing historic buildings saying, “each time we lose one, we lose an opportunity.”  Apparently not fearing the city-estimated $6.6 million price tag to restore the complex, Raettig burned the midnight oil to put together an initial design to save the Sydney HIH complex.  Raetting is attempting to give the Sydney HIH, and in turn Milwaukee, that very opportunity. Hopefully the Milwaukee Common Council will return the favor.

The renderings below are his first view of what could be done to the complex. As evident from the renderings, Raettig intends to restore the buildings as individual properties. 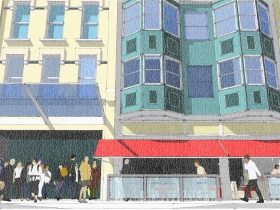 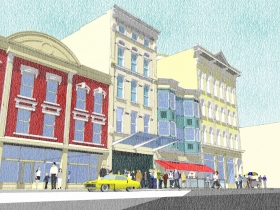