The Historic Preservation Commission recommended approval of interim historic designation for the Sydney Hih building, though the future of the building remains very much in doubt. 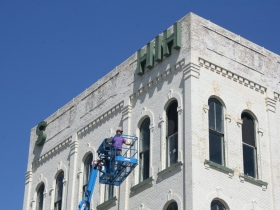 The Historic Preservation Commission (HPC) recommended approval of interim historic designation for the Sydney Hih building, though the future of the building remains very much in doubt. In one of the odder scenarios ever seen before the commission, a shell corporation owned by the City of Milwaukee is attempting to tear down the Sydney Hih building. The building was acquired in an attempt to assemble land for the relocation of Kohl’s corporate headquarters to the Park East area, an effort that Kohl’s opted not to further pursue earlier this year.

The Zoning, Neighborhoods & Development Committee will take up the interim historic designation at their next meeting. Given that there is a standing raze order, a demolition permit could be issued at some point in the future. Today’s proceedings at the very least will slow the city’s efforts to demolish the building, and likely give the city pause on issuing a demolition permit to itself.

An Interim Designation Study Report was provided to the commission that we have made available on our site, as well as a link to the file in Legistar.

We live tweeted the special meeting of the Historic Preservation Commission today, an edited transcript of which is provided below. You can read the original tweets at @UMKELive.