Lt. Governor candidate Mahlon Mitchell could help turnout more black voters -- so why haven’t Dems made more use of him? 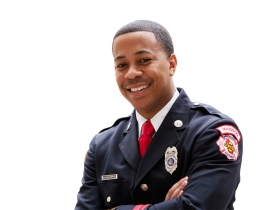 It’s all about the turnout, folks. Both Gov. Scott Walker and Mayor Tom Barrett agree the race will be very close, meaning whichever side gets more supporters out to vote will win the election.

Which brings us to Mahlon Mitchell, the Democratic candidate for Lt. Governor. His candidacy is potent with symbolism. “He would be the first African-American Lieutenant Governor in state history,” notes his communications director Kevin Benish. “Also the highest elected black state official in (state) history.”

That ought to drive turnout of black voters — unless they are not aware Mitchell is running. Benish says Mitchell has been running hard in Milwaukee:  “He just did 12 churches in Milwaukee yesterday.” Mitchell has gotten considerable coverage from Milwaukee’s black newspapers, the Milwaukee Community Journal and the Milwaukee Courier, and from the black radio shows, Benish adds. “It’s definitely going to ignite turnout.”

A big turnout in Milwaukee could be crucial in such a close race. When Barrett ran in 2010, he got 38,000 less Democratic votes in Milwaukee County than Barack Obama did in 2008. A big part of that difference represented black voters who didn’t vote in 2010.

But as Milwaukee Courier editor Lynda L. Jones has written, the May recall primary had a turnout of just 18 percent of black voters. That’s terrible. Jones says “I have hopes” for a huge turnout today, but admits she has no proof it will happen. Milwaukee Journal Sentinel columnist Eugene Kane did a column suggesting Barrett may need “Obama-like levels” of excitement  to win, and “some long-time observers of black Milwaukee aren’t sure that kind of excitement has been tapped.”

All the excitement — and media attention — has been on the Barrett-Walker face-off. Mitchell’s candidacy, meanwhile, has been completely overshadowed. Democrats may regret not having done more to promote him.

This is Pat Boone Calling

Gosh, I just had Pat Boone call me on Monday. Granted, it was a robo-call, but Pat told me he was supporting Scott Walker and his reforms. I thought he might hum a little of his old chestnut, “Love Letters in the Sand,” but nothing doing. It’s probably been more than four decades since Pat had a hit, but Boone was probably called in more to capitalize on his latter-day reputation as a Christian activist.

I also got robocalls from Walker, Gov. Christie of New Jersey and a member of the Tea Party.  Next I suppose it will be Ted Nugent. Maybe he’ll sing a little “Cat Scratch Fever.”

Democrats have hammered the idea that when Walker ran in 2010, he never told voters he would eliminate collective bargaining rights. Walker only warned of requiring givebacks from state employees. But did he do more than just omit the truth?  Last week, a Journal Sentinel story reported, an email from Walker aide Ryan Murray to a deputy sheriff was unearthed in which Murray wrote that “Scott’s plan (to require higher pension contributions) will apply to active state employees only, not to….teachers and local government employees.” Quite misleading.

Murrry, who now serves as Walker’s Deputy Chief of Staff, told the JS that Walker added to his campaign plans once he saw the size of the state’s deficit.

The JS buried the story on page three of its second section. Worse, you will not find the story in the paper’s list of news stories online. The omission may be a mistake, but taken together these decisions assure a very small readership for the story.

JS reporter Rick Romell did an interesting story showing the new jobs generated on Gov. Walker’s watch were in manufacturing, but that the average wage had gone down — an almost abnormal pattern.

What might have been a second headline was this finding: jobs had increased less during Walker’s first year than in his predecessor Jim Doyle’s last year, during the height of the economic meltdown. Walker worse than Doyle on job growth? Not exactly a ringing campaign slogan.

Who Stands Up for Veterans?

Will the Milwaukee Art Museum’s proposal to improve the War Memorial be accepted? George Gaspar, the board president for the War Memorial, said last week he is willing to make some compromises with the art museum over governance of their shared facility, but says he opposes its takeover by the art museum.

The story made it sound as though Gaspar is speaking for all members of his board, but that’s quite doubtful. For starters, the board includes a representative of the art museum, as well as representatives of the Marcus Center, Charles Allis Museum and Villa Terrace, all of whom want to become independent of the War Memorial Board.

Gaspar also argued the War Memorial should stay under the control of veterans groups, but it’s never really been under their control. As my recent column noted, his 15-member board has only one veterans’ representative on it, and as my first story on this subject showed, veterans activities account for just 20 percent of facility rentals and 11 percent of the office space used at the War Memorial.

It’s the art museum that’s presented a plan to improve the facility to create a better showcase for veterans, while the War Memorial board has run the facility in a laissez-faire style for years.

For all the protestations that the proposed changes would be bad for veterans, we have yet to hear from one veterans’ representative objecting to the art museum plan.

6 thoughts on “The Chatter: The Democrats’ Secret Weapon”