The chief opponent of the art museum’s $25 million repair plan has stood by while the War Memorial rotted away.

Few people know the name, but the late Donald Turek served as executive director of the Milwaukee County War Memorial for 37 years, from 1959 through 1996. Some media insiders used to wonder what it was Turek did all day to earn a very nice salary. His retirement announcement was covered in just 93 words by the Milwaukee Journal Sentinel. Turek answered to the Milwaukee County War Memorial Board of Directors, but just how much oversight it provided is not clear. As my recent column noted, a county audit called the board an “antiquated” institution that rarely meets.

Turek was quietly replaced by his second-in-command, David Drent, who has now worked for 40 years at the War Memorial, including 15 as executive director. You might say change comes slowly to the War Memorial.

Meanwhile, the War Memorial has been slowly rotting. Back in 1994, a study of the facility by Kahler Slater architects and developer Gary Grunau found major problems at the 1957 facility and its 1975 Kahler addition. The study found $5.5 million was needed for repairs to the exterior and interior of the War Memorial, including nearly $1 million to replace the leaky art museum roof, which has allowed water into some gallery space.  Other repairs were needed to air conditioning and duct work, the report said, noting the museum “has a very dirty air distribution and duct system that contributes to a musty odor.”

The problems went back many years and had been slowly allowed to get worse. Then county supervisor Tom Bailey recommended Milwaukee County budget $7 million for the problem, but his proposal failed.

Milwaukee Art Museum officials would periodically complain that its art collection was at risk from the water damage and other problems, but nothing was done. In September 2007, water damage caused floors to buckle in the Kahler addition. Drent’s response was lethargic: “I don’t know if there’s a magic pill on this one,” he said. “But we need to find ways to minimize the damage.”

A 2005 editorial by the Milwaukee Journal Sentinel about the facility’s problems suggested creating a public-private partnership that would enlist the aid of veterans groups to solve the problem. After all, local veterans groups had donated to other causes; why not to the city’s most important war memorial? The natural person to organize the effort would have been Drent, but no such campaign ever materialized. 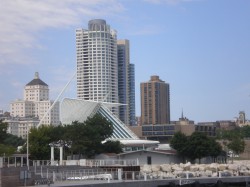 That, in essence, is what Milwaukee Art Museum art director Dan Keegan is proposing: the museum would raise $15 million in private dollars and the county would kick in $9.8 million (with much of the county money going to finally repair the same old problems). But Drent, who has in the past supported more funding from the county, now opposes the idea since Keegan’s plan calls for the museum to take over operation of the War Memorial. Keegan notes, reasonably enough, that the museum can’t spend money to repair and renovate a facility it doesn’t control — and whose landlord, he might have added, has long stood by as the museum’s art collection was periodically threatened by water damage.

“You’ve heard our plan,” Keegan says. “What is David Drent’s plan? I haven’t heard it yet.”

Drent will only say he needs more time: “We’re trying to figure out what we can do. It’s just very complicated.”

A county audit has suggested there are efficiencies to be realized if the museum and War Memorial merged operations. But Drent could lose his job — he earns $110,000 annually — if the museum took over the War Memorial.

Drent, however, contends his concern is the veterans. “We want to make sure the veterans will always be honored.”

But if this was truly Drent’s concern, why hasn’t he done more to stop the War Memorial’s deterioration?

Drent claims he works “closely” with the War Memorial veterans board, a kind of advisory board, but could not tell me their position on the art museum’s renovation plan. Nor could he supply a phone number for the board chairman.

As for the War Memorial Board of Trustees, its 15 member board includes just one member appointed by veterans. And the board might as well be invisible. The list of board members can’t be found at the War Memorial website or anywhere else online. When asked why, Drent says “I don’t have an answer for you. It should be.”

The reality is that the two groups most directly affected — the art museum and veterans — don’t really have much power over the War Memorial. Maybe that’s why its falling apart. Keegan’s proposal, once and for all, is a chance to solve the problem.