The candidates are worlds apart politically -- but practically neighbors. 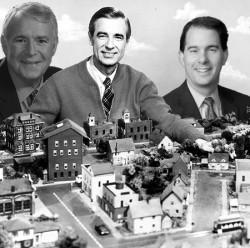 Won’t you be my neighbor?

Once it was impossible for a candidate from Milwaukee to get elected governor. Now, it seems that’s the only kind we want to elect. In a state encompassing 65,505 square miles, Gov. Scott Walker and Mayor Tom Barrett live bizarrely close to each other, exactly two miles and 59 feet apart. Barrett is at 5030 W. Washington Blvd., just a ways northeast of Walker, who lives at 520 N. 68th Street in Wauwatosa. Walker lives near the Valley Forge neighborhood, and some Republicans would have you believe he’s suffering as much abuse as George Washington once did. Barrett is in the Washington Heights neighborhood and hopes to scale the heights on June 5. The two town rivals are so close geographically you’d think they could just meet half-way at Hawthorn Glen and settle the election mano-a-mano.

It seems to have become an article of faith among conservatives that recalls have gone overboard and we need limits on their use. An interesting exception is the Citizens for Responsible Government, and its spokesperson Chris Kliesmet. Kliesmet is a fervent Walker supporter, but opposed to limiting the use of recalls in Wisconsin.

No one has worked on more recalls in this state. Kliesmet estimates CRG has helped groups launch at least two dozen recalls. Most were small municipal elections and had a conservative slant, often in opposition to government spending. CRG was formed to recall former Milwaukee County Executive F. Thomas Ament, whose resignation opened the door for the election of Scott Walker.

Kliesmet argues that frivolous recalls will not succeed. “If it’s for a bad reason — I don’t like the official’s dog — you’re not going to get the signatures.”

And Kliesmet is adamant that recalls are critical to a vibrant democracy. “Do you wait till the next election to fire a bad plumber?” he asks. “Politicians are not a protected class. They should not be given a four-year no-cut contract.”

Why the Journal Sentinel Endorsed Walker

Many around town were buzzing about the Milwaukee Journal Sentinel’s endorsement of Scott Walker. The editorial, after all, offered a laundry list of negatives about Walker’s performance, noting that “No governor in America is so polarizing” and “Walker brought on some of this animosity on himself,” while Act 10 was “an overreach of political power.” That sounds more or less like a Barrett stump speech.

Yet the JS had no choice but to endorse Walker because it has editorialized against recalls pursued because of disagreement over “a single policy.” It has yet to explain why the recall was a legitimate tool in the case of Tom Ament and the single policy change (the pension plan) he championed.

But in the future, to be consistent, it will have to oppose the recall when the next politician passes some outrageously self-serving but legal piece of legislation like the county pension plan. It seems a strange position indeed for a paper that prides itself on its watchdog stories to protect the public interest.

Readers were quick to point out that the New York Times did get around to reviewing the Milwaukee Symphony Orchestra’s performance at Carnegie Hall. Critic James R. Oestreich’s review offered plenty of praise. He lauded music director Edo de Waart, who, “no surprise, showed full command here and in the more standard works” and the “responsive orchestra (which) shone everywhere, with warm strings, characterful woodwinds and strong brasses.” Characterful woodwinds are my favorite kind.

MSO musicians are still hopeful that New Yorker writer Alex Ross (for my money the best classical music critic in America) will review the concert.

The Journal Sentinel presumably didn’t think it was worth the cost to fly its freelance critic to review the concert, yet Shepherd Express critic Rick Walters and ThirdCoast Digest’s Tom Strini managed to get there. Word has it Walters had frequent flyer miles and Strini got help from a symphony patron. So it goes in a world where publications of all kinds are slashing their budgets for arts critics.

JS reporter Don Behm did a solid and pretty gutsy story on Waukesha’s bid for Lake Michigan water that predicts the city is unlikely to meet the legal deadline for its proposal. Waukesha is the first city completely outside the Great Lakes basis to ask the various states in the region for permission to divert Lake Michigan, but there is a legal time table for such proposals, and Waukesha looks like it may not make it.

The legal requirements are hard enough, but Waukesha hurt itself first by going the cheap route. Instead of proposing to build a pipeline to return water all the way back to the lake, which would have been more expensive, it chose the option of returning the water to Underwood Creek in Wauwatosa, where the water would then flow into the Menomonee River and eventually to the lake. But that raises sticky environmental issues that will delay the process.

Waukesha’s voters hurt the effort by electing Jeff Scrima as mayor, who ran on an anti-Milwaukee platform and has done everything to oppose and slow down the proposal to gain Lake Michigan water. It looks like Scrima and his supporters are going to get their way. But they may regret it.

3 thoughts on “The Chatter: The Barrett-Walker ‘Hood”