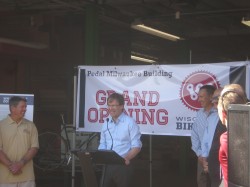 Will Chris Abele run for mayor? Sources have told me the Milwaukee County Executive is considering running for mayor of Milwaukee should Tom Barrett get elected governor — and has even talked about trying to hold both positions at once. I reached Abele, who conceded discussing this with friends: “I tend to think out loud.” Abele said he spends a lot of time thinking about efficiencies and how to consolidate government functions, and that any merger of city and county functions is inevitably stymied by turf battles. Whereas if he held both executive positions, he jokes, “I’m unlikely to get into turf battles with myself.”

That’s funny, but perhaps not the best campaign slogan. I think the idea of Abele holding both positions would get quickly hooted down as an unseemly power grab, with radio squawkers Charlie Sykes and Mark Belling leading the chorus of critics. Abele, however, adds that “it’s nothing I’m actively pursuing.”

Nor could he. As Sykes has noted, correcting an early version of my column, if Barrett is elected governor, Common Council President Willie Hines would take over as acting mayor.

Last week I wrote about State Sen. Van Wanggaard’s double dipping. It’s worth noting two other double dippers, in this case Democrats: New City Treasurer Spencer Coggs intends to continue collecting his state senator salary of about $50,000 through 2012 even as he earns $114,000 from the city. And new county supervisor Dave Cullen intends to continue collecting his state assembly salary through 2012. Both have suggested they might give the money back to charity, but as talk radio’s Jeff Wagner notes, these kind of promises are easily broken. Indeed, former county supervisors Joe Rice and Paul Cesarz both made pledges to give back much of their salaries, but the press soon forgot about it and neither ever disclosed how much they ever gave back.

My, how times have changed. In the old days, a trip by the Milwaukee Symphony Orchestra would have generated a bunch of reviews from the New York press, bringing the MSO national attention. Nowadays, the concert doesn’t even get a review by the home town newspaper. That’s right, last Friday’s Carnegie Hall concert got no review from the New York Times or any other NYC publication, nor even from the Milwaukee Journal Sentinel. The only reviews were by Milwaukee’s ThirdCoast Digest (thanks to Tom Strini), and the daily paper in Birmingham, Alabama. Imagine the next time the orchestra tries to sell donors to sponsor such a trip: hey, this could get us a review from an Alabama critic.

The eyes have it: gubernatorial rivals Scott Walker and Tom Barrett are in many ways polar opposites, particularly when you look at their eyes. Walker’s typically look sleepy, even when he’s delivering a fiery speech. Barrett looks wild-eyed; there’s a strange intensity to the cast of his eyes. It’s ironic: firebrand revolutionary Walker looks like he’s about to snooze while the typically bland Barrett’s eyes signal a crazed ferocity.

In a Sunday New York Times story on the Tea Party challenge to Senate Minority Leader Mitch McConnell, Wisconsin’s Senator Ron Johnson was cited as a key ally: McConnell “enlisted” Johnson, “a freshman elected with Tea Party backing, to lead efforts to coordinate the Republican messages and agenda in the Senate and the House with the party’s presidential nominee.” That seeming elevation of Johnson’s stature is ironic, since Johnson subtly distanced himself from the Tea Party during his successful campaign against Russ Feingold.

The same story noted that “Representative Paul D. Ryan of Wisconsin, the House Budget Committee chairman, has become perhaps his party’s most important policy maker.” That’s good news for Ryan, but makes you wonder just how deep the GOP party’s bench goes when it comes to policy making.

The Journal Sentinel has been too high-minded to report the fact that Walker spokeswoman Ciara Matthews was once a Hooters girl, but the liberal Capital Times was happy to spread the story and link to a spicy image, earning the scorn of Fox Nation and Jeff Wagner.

Not to be outdone, conservatives have gone after state Democratic Party Communications Director Graeme Zielinski for burning a flag while in college. I’m sure members of both parties are relieved that no photos of a scantily dressed Zielinski were unearthed.

Where was Peter Bock?

Did anyone notice Peter Bock’s invisibility in the Democratic gubernatorial primary? Bock is a former state legislator who was highly regarded (a 1997 Milwaukee Magazine story by yours truly rated him as one of the ten best lawmakers)  and is married to Kathleen Falk,  but you never heard about him campaigning for her in the gubernatorial primary. Of course, Bock is also an old friend of Falk’s opponent Tom Barrett; Barrett and Bock often traveled to Madison together when both were legislators.

Kudos to reporter Cary Spivak and the Journal Sentinel for their Sunday stories on corporate executive pay. As grossly high as company filings show CEO pay is today, Spivak has documented that the pay is even higher in some cases, as documented by the state net tax records. He found that in 2010, former Bucryrus International CEO Tim Sullivan and Rockwell Automation CEO Keith Nosbusch both earned a stratospheric $29.5 million while Harley Davidson CEO Keith Wandell brought home $20.4 million.

Spivak also took a look at shareholder votes on executive pay, showing that many companies are seeing a backlash from shareholders. And small wonder, when you have numerous CEOs getting huge raises while shareholders get the shaft: in 2011, Manitowoc Co. Inc. CEO Glen Tellock got a 77 percent raise while the value of the company’s stock declined 29 percent and MGIC Investment Corp. CEO Curt Culver saw his pay rise 28 percent while the company’s stock dropped 63 percent.

The newspaper typically includes the pay of its own CEO in these stories, but this story went further, spotlighting Journal Communications Inc. CEO Steven Smith, whose rose by 8.5 percent even as company earnings dropped by 35 percent and the stock price dropped 9 percent. That showed some guts by JS editor Marty Kaiser.

9 thoughts on “The Chatter: Will Abele Run for Mayor?”