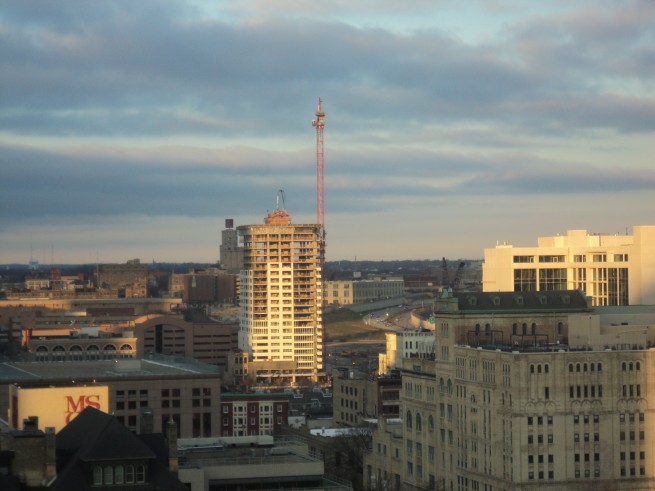 As the US economy continued its slow recovery from the Great Recession, Milwaukee was left with a couple of failed development projects to complete, a changing real estate market, the opportunity to make small infrastructure changes, and questions about the future of transit.  In 2011, some of these ‘failed projects’ moved towards becoming successes, while the developers in town shifted from condominium development to apartments and hotels.  Small changes to the built environment came in the form of new bike infrastructure, and the conversion of streets to two-way traffic.  Although the Milwaukee County Transit System once again faced budget cuts, there was movement in bringing new modern transit service to Milwaukee in the form of express busing.

First Place on the River, Park Lafayette, and The Residences on Water all ended up in serious financial trouble, and in some cases in drawn out legal battles.  Park Lafayette, which had been considered by many a failure, became a turnaround success under the guidance of the Mandel Group in 2011 as it was converted from high-end condos to luxury apartments, and today it is 93% occupied.  Equally as impressive of a turnaround story is The Point on the River (formally First Place on the River).  The developer had run out of funding, and once the lending bank took over they brought in the  Mandel Group to complete the project.  Ever since, Mandel Group and Garrison Partners have been steadily selling units in the project, and while there were over 45 units available this time last year there are only 11 available for sale today.  The one significant project that has yet to be resolved is The Residences on Water, but signs indicate that the drawn out legal battle surrounding it is coming to a close.

The apartment market saw continued development through a strong reliance on WHEDA tax credits and other forms of  government financing (due to the weakened financial industry).  The construction of the Beerline B Apartments, which is being funded with WHEDA tax credits, nears completion.  Another WHEDA funded project, the 73-unit National City Lofts in Walker’s Point, began accepting tenants in October.  Although Mercy Housing Lakefront’s East Side apartment proposal received various city approvals, and appeared on the verge of moving forward, it failed to obtain WHEDA tax credits to support the funding of the project.  The second phase of The North End development, which will include two buildings and 155-units, gained approval for a $4.6 million loan from the City of Milwaukee and will utilize $26.9 million in WHEDA bonding to construct the project.  The most visible development in 2011 has been the construction of  the 30-story 203-unit apartment building, The Moderne.  It was financed with a $42.4 million loan from the AFL-CIO Housing Investment Trust (HIT), a $9.3 million loan by the City of Milwaukee, and $5 million private equity, and expects to be topping off in early 2012.

Hotel development became a hot area of development and controversy in 2011.  The controversial Marriott Hotel project was approved by the city, and in part because of the debate more of the historic buildings than originally proposed will be saved.  Unlike the Marriott project, two other downtown hotels are being developed within historic structures without significant demolition.  A proposal that would develop a Hilton Gardens Hotel within the Historic Loyalty Building in downtown Milwaukee worked through legal issues allowing for construction to get underway.  At The Brewery, Gorman & Company has started the redevelopment of the former brewhouse building into a boutique hotel. 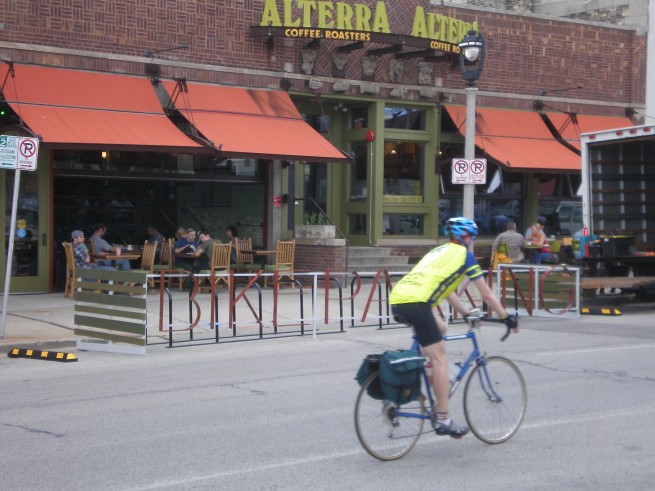 The built environment saw small, but important improvements in 2011.  Wells Street was finally converted to two-way traffic and carmaggedon didn’t follow.  The streetscaping of Broadway in the Historic Third Ward, which will tie the district together, is finally being completed.  Bay View saw Milwaukee’s first raised bike lane built, and on-street bike corrals began popping up on streets around the East Side.  S. 2nd Street, in Walker’s Point, re-opened with the new street redesign, and quickly saw numerous establishments add cafe seating, and a the construction of a new building, the Milwaukee Fix, get underway.

Transit both made steps forward and steps backwards in 2011.  As we believed would happen, cuts to mass transit funding were deep at the state level, and threatened to push MCTS off the cliff.  Although new County Executive Chris Abele worked to maintain transit service by converting some routes to express routes to save money, this still represented a net reduction in service.  At the same time, the Milwaukee Streetcar project was approved by the Common Council on a 10-5 vote this year and has now proceeded into final engineering.  Though as we feared a challenge is being made to Milwaukee’s local control.  Brett Healy, of Oconomowoc, has petitioned the Public Service Commission to rule that, despite local ordinance, the City of Milwaukee must pay the cost to re-locate utilities operating in the public rights-of-way necessitated by the streetcar construction.

In 2011 Milwaukee continued to face a difficult financial and political environment, but managed to move forward on improvements to the built environment, transit, and many significant development projects.