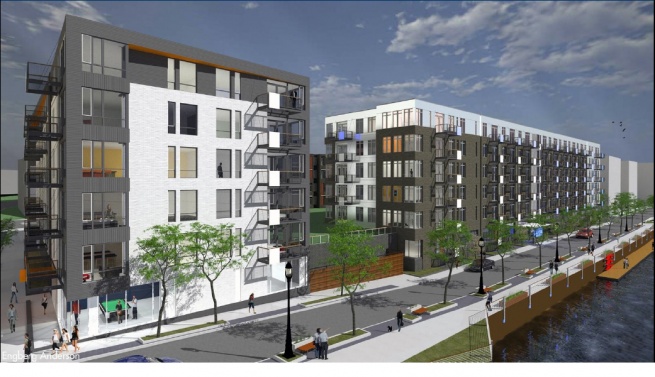 At yesterday’s meeting of the Zoning, Neighborhoods and Development Committee meeting Mandel Group’s efforts to acquire financing for the next phase of The North End were recommended for approval. The $4.6 million city loan was approved as part of the second amendment to the Park East TID No 48 has a term of 18 years and a 5.5% fixed interest rate.

The second phase will include two buildings, a 55-unit building and a 100-unit building, both one-story taller than the previous buildings. The 55-unit apartment building will complete the block face along Pleasant St. and frame a new public square. The 100-unit building will be constructed along a new street that will run along the Milwaukee River. As the project is being partially funded by WHEDA with $26.18 million (was originally $24 million) in variable rate tax-exempt bonds 80% of the apartments will be offered at market rates while 20% will be reserved as affordable housing units. Additionally, $2.2 million of previously approved TIF funds will be used during this phase to construct the dockwall, the riverwalk, a public square, and a new street. This file will now go before the full Common Council for approval

Tom Daykin has an article on the approval as well, City Loan for North End Phase II Recommended for Approval at committee.