Enough with the excuses already, add the bike lane to the Hoan Bridge 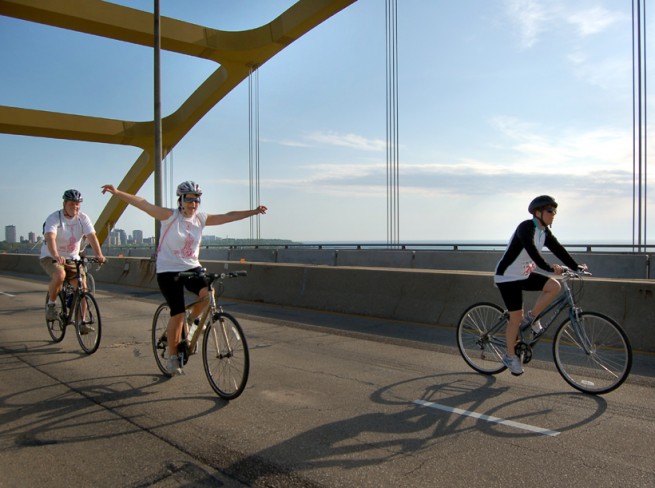 Should the Hoan Bridge have a bike and pedestrian path or not?  According to comment section of the Journal Sentinel it appears that there are numerous ‘reasons’ why a bike lane should not be built on the Hoan Bridge, but are they really valid?

Certainly, wind impacts bicyclists ability to ride, but this is not a problem unique to the Hoan Bridge in Milwaukee.  In fact people walk and bike over the Brooklyn Bridge and the Golden Gate Bridge regularly, so it seems the wind issue can be managed or is simply a lot of hot air.  Additionally, it should be noted that this past summer 7,000 bicyclists road over the Hoan, and not one of them was blown off.

From the ground the Hoan Bridge certainly looks like it would be a difficult climb, but again this past summer 7,000 bicyclists of all ages, including children, riding a wide range of bicycles, and of  all skill levels rode right on over it.  As one of those bicyclists, I can tell you it is not a difficult climb, in fact it is not nearly as difficult a climb as numerous of the hills located around Milwaukee that people bike over regularly.

Concerns over the safety of bicyclists are often raised, and safety should of course be a significant concern.  However, the design would not to simply paint a white stripe on the Interstate and designate a section for bicyclists.  The design would include concrete walls separating bicycle traffic from automobile traffic.  This separation would keep pedestrians and bicyclists out of automobile lanes, and of course keep automobiles out of the path, making it perfectly safe.

Some people, and one Milwaukee County Supervisor in particular, fear that removing an automobile lane would cause traffic backups and congestion.  The truth is the bridge carries just 40,000 cars a day, barely enough for it to qualify for Interstate status, and far from a two-lane highway’s capacity.  In fact the bridge likely never hits peak traffic levels, and it is also likely that the UPAF ride was among the most highly utilized couple of hours in the bridge’s history.  Further, on either end of the bridge travel lanes drop to two-lanes negating much of the value of the additional lane.  Finally, there have been numerous times when these lanes have been closed (as they are now) and traffic didn’t backup.  To make this perfectly clear, Dave Schlabowske took some videos on multiple days showing how traffic flows fine, during rush hour, without the additional traffic lane that would be removed for the bike trail.

Although, it may seem on its surface that bicyclists shouldn’t be on Interstates, the reality is that bicyclists are allowed on Interstates unless otherwise posted, which often enough individual states decided to post a restriction.  But, in the case of federally funded bridges it is actually the case that bicycle and pedestrian considerations are required by the United States Code (U.S.C.) and the Code of Federal Regulations (CFR) in Title 23—Highways, Title 49—Transportation, and Title 42—The Public Health and Welfare.  Additionally, there are examples such as Interstate 90 in Seattle which currently has a bike lane on it, with few or no issues.

There is no doubt that during the winter bicycle traffic will drop off.  But winter isn’t twelve months of the year, and bicycling isn’t a summer only activity.  Further, people have no issue with other outdoor winter activities including skiing, sledding, or ice skating, and every year more and more year-round bike commuters are entering our roads, myself included.

The most serious of these ‘issues’ revolves around cost.  Certainly, if the new bike trail is to cost $100 million it maybe shouldn’t be built, but if it is a small portion of a $300 million re-decking project, it is worth the cost.

There are plenty of valid reasons to build the bike lane, including enhanced tourism, healthy living, improved air quality, congestion reduction, and improved connectivity to name just a few.  So enough with the excuses already, add the bike lane to the Hoan Bridge.

24 thoughts on “Enough with the excuses already, add the bike lane to the Hoan Bridge”