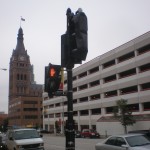 The city is evidently moving quickly to insure the street is ready before the Wisconsin Avenue bridge closing, because this two-way conversion will provide better access to multiple businesses in Westown that would otherwise be difficult to access during the closing.  This short-term need is certainly important and was the impetus for the change, but the long-term need is just as significant.

Eliminating this multi-lane, one-way expressway will improve downtown Milwaukee’s pedestrian and retail environment, while also improving access for people driving to their destinations.  As has been seen after the conversion of E. State Street, it will significantly reduce the rampant speeding that occurs regularly on Wells St. which will make the street more comfortable to cross and walk along.  Additionally, two-way streets eliminate the need to endlessly circle the block, while improving accessibility for people unfamiliar with the area.  Further, in conjunction with lower traveling speeds it will improve visibility to businesses along Wells Street making the street more desirable to retail locations, and in turn to pedestrians.  All are good reasons to consider converting the street back to two-ways, and when it’s all put together it is a simple choice, Wells Street can be oriented for speeding and a handful peak travel days or for pedestrians, cyclists, drivers, and business owners daily use.

Although there is a small possibility the street could revert to one-way travel after the Wisconsin Avenue bridge rebuild completion, it is more likely people will forget it was ever a one-way street.  Much of  State Street, Milwaukee Street, Jackson Street, Van Buren Street and Broadway have been converted to two-way streets in the past twenty years, and all have helped to improve downtown Milwaukee’s built environment, for the pedestrian, business owner, and even the person behind the wheel.  Seeing that none of these streets have been converted back to one-way streets, it is more than likely that Wells Street will have the same success.