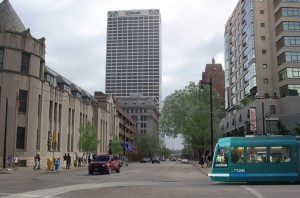 George H. Bush was President, Robin Yount was roaming centerfield, and Milwaukee was being allocated funds that were to be dedicated for the development of a new mass transit mode. The funds, $289 million worth, represented a substantial amount of purchasing power in 1991. But the transit improvements never came. Some of the funds ultimately went to tear down the Park East, some for of the funds were used by the freeway system, and some were sent to Milwaukee County to implement a bus rapid transit system that has yet materialize. Today the city’s share is only $54.9 million. Over the years there was talk of the Canal Street Connector and a guided bus system, but with yesterday’s action by the Steering & Rules Committee it looks like the Milwaukee Streetcar is moving Milwaukee forward.

At yesterday’s Steering & Rules Committee Meeting, the Committee on a vote of 5-2, with Alderman Joe Davis, Ashanti Hamilton, Bob Bauman, Jim Witkowiak, and Willie Hines in support, voted to approve the Milwaukee Streetcar legislation. Aldermen Jim Bohl and Michael Murphy voted in opposition, and both raised legitimate issues, though not insurmountable ones. The plan includes $9.7 million in TIF dollars that will be used to help fund the construction of the project.  Despite the project touching the TID and the funds being used for public infrastructure, two key requirements of TIF funding, Alderman Bohl questioned whether or not TIF funds could be used for the project. Both members in opposition were concerned with the potential cost to move utilities, and if that would be the City of Milwaukee’s responsibility or the utility companies. We Energies and AT&T recently (AT&T oddly – or possibly strategically – waited until the day before the meeting to unveil their concerns) put out estimates suggesting the cost to move their utilities could be as high as $50 million.  Department of Public Works Commissioner Ghassan Korban explained that it is common when utilities in the public rights-of-way are needed to be moved the cost generally falls on the utility (the Marquette Interchange project required $32 million in adjustments, an amount far below initial estimates). He went on to explain that after the approval of this legislation the engineering will move beyond the 30% phase, and that the department will be working closely with the utilities to bring these costs down and find workable solutions.  It was apparent that the City of Milwaukee will make adjustment to the alignment or location in the street of the system to dramatically reduce these cost if the estimates are close to being accurate.

The next step is for the file to go before the full Common Council on July 26th, 2011. If approved it would be expected that Mayor Barrett would sign it shortly thereafter and the City of Milwaukee would truly be on the way to building a modern mass transit system helping to move Milwaukee forward.

And we’d like to give a quick thanks to the UrbanMilwaukee.com readers, as you helped move Milwaukee Forward!

One thought on “Milwaukee Moves Forward!”