The Return of the King

After a 14-year absence, King Gambrinus has returned to his rightful courtyard placement in Milwaukee’s “Best Place” at 901 W. Juneau Ave., the legendary hall and tavern  at the former Pabst Brewery, kept alive by Jim Haertel and other investors, after prolonged negotiations to indefinitely loan it from the corporate offices of Pabst Brewing Company.

The official unveiling happened at 1:23 p.m. Saturday (an inside joke alluding to Haertel’s birthday and favorite number), after the 900-lb. aluminum statue was returned to the state in recent days.  The original deal to return the statue was struck almost six months ago through then-Pabst president Kevin Kotecki and Sanjiv Giwala, but it was decided to wait until the winter weather improved to move it.  Then during a new shake-up in Pabst leadership and the May 14 announcement that the company headquarters was moving to Los Angeles, Haertel was convinced the statue was a lost cause once again.  But luckily, the new Pabst heads agreed to the indefinite loan plan as well.

Worried about the terms, Haertel says, “They told me ‘we hope to never ask for it back again’.”

The longtime steward of this property (and remarkable walking beer encyclopedia) is enjoying a rare relaxed moment inside the Sternewirt side tavern, just adjacent to the secondary courtyard where the King is raising a toast skyward. This quiet moment comes just after his second tour group of the day and just before he has to run off to an awards dinner for the Leukemia and Lymphoma Society (LLS) — where he has been nominated for a “Man of the Year” award.

Best Place’s Blue Ribbon Hall has become known as a place for live music, wedding receptions, and charitable fundraisers.  This weekend’s 1-year Anniversary party also serves as a bake sale/auction for Cookies for Kids’ Cancer and continuing fundraising for LLS.  The return of this statue should mark a renewed interest in the site during languid warm weather events like this.

“[The loan] depends on the wonderful relationship we have continuing,” explains Haertel. “They were quite concerned when our buildings might become a Hofbrauhaus, so they were trying to find ways to help us continuing keeping this a Pabst place. So for instance, they’re letting us sell things in our gift shop you can’t find anywhere else.”

Negotiations between Haertel, the BrewCity Redevelopment Group, LLC and the Cincinnati Restaurant Group’s Hofbrauhaus chain fell apart last year as the multi-million financing could not be acquired — combined with Haertel’s insistence that the location didn’t lose its heritage.  Instead, the Hofbrauhaus is now planning a restaurant/beer hall in the nearby kettle building, which actually houses an extraordinary, but largely unseen, two-story stained glass portrait of King Gambrinus.

When Pabst Brewing ended operations in Milwaukee and Miller Brewing took over contract work for Pabst, the King Gambrinus statue ended up in a cramped technical center of Miller’s operation.  Haertel says a ceiling tile even had to be taken out to accommodate the King’s raised beer stein. Approximately seven years ago, the statue disappeared.  It ended up ignominiously in the employee lunchroom of Pabst’s Illinois headquarters.   It was on a recent visit there that Haertel spotted it.

“And there, in a non-important corner next to a Foosball table, there was King Gambrinus with someone’s necktie around him,” he says. “I kind of looked over and looked back — I said this ‘this is it’?”

The pair immediately agreed that the statue would be better served at its home.

The original King Gambrinus statue in Milwaukee was sculpted in 1857, representing the legendary patron saint of crafting beer in a city that would soon become known as the brewing capital of the world.  The wooden version would eventually deteriorate so badly that in 1966 a new painted metal version was commissioned.  It was this version that is made famous on postcards sent around the world and in return often served as a pictoral representative of Brew City.

Up until now, a clever old sign sitting on a pedestal has stood in the statue’s place — the same one used to declare that he was off making special appearances on parade floats during the holidays.  That sign is still there, but tossed to the side of the King’s courtyard.

Catch our sneak preview of the statue here before Saturday’s unveiling, along with some other Best Place photos (click on photo for full view): 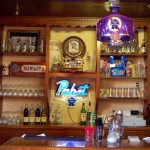 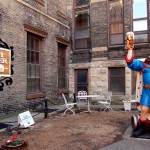 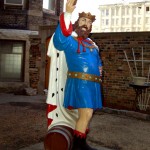 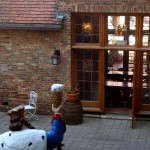 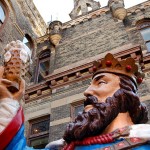 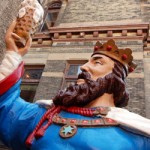 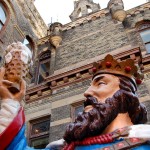 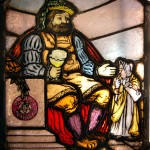 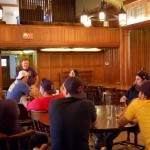 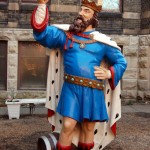 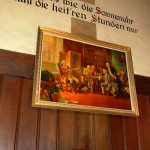 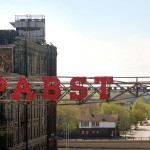 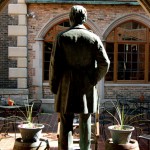 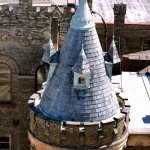 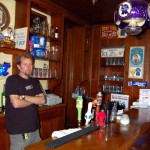 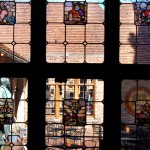 0 thoughts on “TCD Exclusive: The Return of the King”