We know James Goldman‘s The Lion in Winter from the 1968 film that won three Academy Awards, including Best Actress for Katharine Hepburn. So the bar is high for any revival of the 1966 play.

The play is a fictionalized account of an English royal family Christmas in 1183. King Henry II (Brian Mani) has given his wife, Eleanor of Aquitaine (Tracy Michelle Arnold), a respite from imprisonment to share the holidays with him. She joins the king and their three sons, the soldierly Richard (the lion-heart), the diplomatic Geoffrey, and John, the whiny and disgruntled youngest, at a palace in France. Sex and power, more than decorating, wrapping gifts and sipping mulled wine, dance in the royal heads.

The sex is in the form of Henry and Eleanor’s break-up-to-make-up pragmatism. Then there’s Alais, Henry’s pretty young thing, whom he wants to marry. Finally, there’s Philip, the King of France and Richard’s affair. Amid this knot of relationships, Henry and Eleanor struggle to name Henry’s successor.

The script is strong. The plot and setting lend themselves to a traditional, quasi-Shakespearean experience. Wright directs accordingly, and set designer Stephen Hudson-Mairet’s versatile Gothic arches serve as great room, dungeon and bedroom. (Hudson-Mairet and costume designer Debra Krajec are both are Marquette faculty.)

Tracy Michelle Arnold, as Eleanor, plays to the strength of the supposedly weaker sex with a natural poise. She also delivers some of the play’s best lines with impeccable comic timing. She assesses all the intrigues, plots, mistresses and mayhem in Hepburn-inflected homage: “What family doesn’t have its ups and downs?” In her serious moments, Arnold’s Eleanor is convincingly maternal and politically practical.

Brian Mani takes on Henry in a staid Shakespearean guise. But he achieves a certain contemporary honesty that this particular version of 12th century events requires. His masculinity and robust presence belie his rather tentative approach to the varied conflicts he faces.

Perhaps in deference to the Marquette alliance, the play’s sex-driven motivations become safely chaste. Henry’s relationship with Alais is almost paternal, and Richard and Philip maintain a closeted distance save for a fleeting kiss. 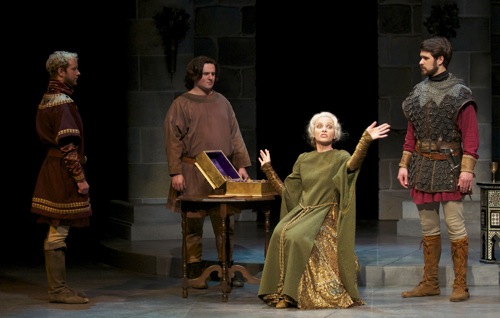