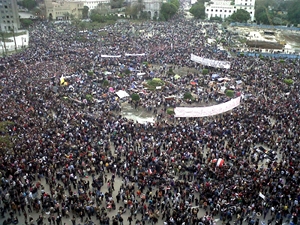 We all watched as Egyptians rose up to overthrow a dictator, and take back their country.  Some, myself included, have called what we saw in Egypt the Facebook Revolution, and even Secretary Clinton suggested that the Internet is the new ‘public square’.  But even on the days when the government shut down the Internet and cell phone access, protestors inherently knew where to gather.  In Tahrir Square.  In liberation square.

They knew this because a public square is a place to organize, to be seen and heard.  It can act as a focal point,  a place of community, sometimes even a place of revolution, and a place where real life social networking can occur.  In the U.S. the role of public squares and public places for political rallies has continued to be important to this day.  As we have between the recent events in Madison, WI, and 2010 Tea Party rallies, these rallies are held in public squares and community parks.

Former Mayor John Norquist often pointed out, that when there is a big game they don’t show Bluemound Road, they show the skyline of the city.  They do this because place matters.  And when stuff happens, albeit political rallies, uprisings, or even community events as mundane as festivals or concerts happen, not too often does the parking lot of a Mayfair Mall suffice, a public square or park is preferred.

Chicago has its Millennium Park, New York City has Central Park, London has Trafalgar Square, Amsterdam has Dam Square, and Seattle and Portland both have Pioneer Square.  In Milwaukee it isn’t quite clear.

Now I’m not writing about Milwaukee’s need for a place to start a revolution, certainly not, but what is Milwaukee’s great central gathering place?   Some could argue that the design would have suggested that MacArthur Square was our civic space, to some extent Cathedral Square has become a central square for many of our residents, and our lakefront is often utilized for many events.  So I ask do we have a great public place, if so, where is it?