MCTS Should Take the Next Step to Government 2.0 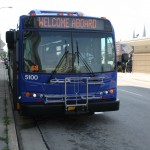 Government 2.0 is the idea of exposing government controlled data to the public, in an open standardized format.  This allows the public to build applications utilizing the data, and allows the government to become more efficient and transparent.  There are numerous data feeds that local governments could and should make available in open formats to the public.  Crime stats, building violations, service requests, and transit data are just a tiny fraction of what can be done to make our government more open and useful.  And all of these would be worthwhile projects in their own right, but transit data offers an early, affordable, quick win for Milwaukee.

Recently, MCTS took the first step forward in this area, by publishing transit scheduling in the Google Transit Feed Specification (GTFS) format.  This has allowed MCTS transit routes to be integrated with Google Transit, and a variety of other applications for trip planning.  But this is just the first step of opening up transit data.

The next step for MCTS, is to open up real-time GPS location data of their buses.  Other cities, such as Portland, New York, Boston, Washington D.C., San Francisco, Chicago, and Seattle have done this, and have seen the rise of applications as a result.  In Portland, you can check when the next MAX light-rail train arrives via an iPhone or from count down timers in local coffee shops.  In Boston when this data was opened up, within an hour the first application was freely available to the public.  In these cities, instead of waiting in the cold for a bus that is running late or one that you just missed, a quick check of your iPhone, will tell you accurately when the next bus arrives at the bus stop.

At one time the Milwaukee County Transit System was a leader in delivering services to the public, today it is lagging behind.  MCTS could spend the funds to develop these services internally, but that route is limiting and costly.  Taking the next step, toward Government 2.0, will allow Milwaukee’s open-source community to help make Milwaukee County more transparent, while providing enhanced services to residents.

24 thoughts on “MCTS Should Take the Next Step to Government 2.0”