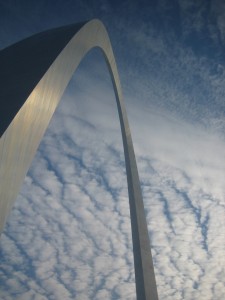 For anyone that’s ever been to the iconic Gateway Arch in St. Louis, it’s quite apparent that the structure itself is worthy of praise. It’s imposing presence largely defines the image outsiders’ have of of St. Louis. And as much as riding up to the top of the arch provides a great view of the surrounding area, the grounds that surround the structure are extremely underwhelming.

The Gateway Arch grounds are separated from the city by roads on 3 sides, and the Mississippi River connection is an empty plaza and staircase. The grounds themselves are mere pathways leading to the Arch, lined with trees, devoid of place. Downtown, immediately west of the Arch, is a short, but uncomfortable walk away because of the trenched Interstate 70. Laclede’s Landing to the north is separated by the approach structure to the Eads Bridge. To the south, the Poplar Street Bridge, carrying Interstate’s 55, 64, and 70s separates the grounds from the city with the bridge approach and a large interchange. Because of it’s lack of connection to the city, if the Arch itself was to disappear, the grounds would be devoid completely devoid of people.

Enter The City + The Arch + The River design competition, with the goal of having much of the winning proposal in place by 2015.

The 10 design goals of the competition program are stated as follows:
1. Create an iconic place for the international icon, the Gateway Arch.
2. Catalyze increased vitality in the St. Louis region.
3. Honor the character defining elements of the National Historic Landmark.
4. Weave connections and transitions from the City and the Arch grounds to the
River.
5. Embrace the Mississippi River and the east bank in Illinois as an integral part of
the National Park.
6. Reinvigorate the mission to tell the story of St. Louis as the gateway to national
expansion.
7. Create attractors to promote extended visitation to the Arch, the City and the River.
8. Mitigate the impact of transportation systems.
9. Develop a sustainable future.
10. Enhance the visitor experience and create a welcoming and accessible
environment. 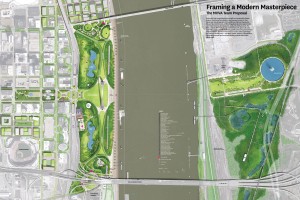 While some of those aspects are a bit more abstract, five design teams submitted thorough bids with those 10 goals in mind. UrbanSTL has a breakdown of each entry, including links to their submitted materials.

Ultimately, the proposal by MVVA was selected as the winner (proposal review). Alex at UrbanSTL wasn’t overwhelmed by their proposal (nor does it seem others were in the site’s forum), but it appears this was the most feasible choice compared to others who had proposed gondolas and large concert venues.

A short video is included below that flies through the project details.

As an outsider looking in, I’m still excited about the redesign.  As much it is known as the Gateway to the West, it is really the Gateway to St. Louis through the eyes of tourists. It includes the a freeway cap over Interstate 70 to connect the grounds to the west of the city, something that seems feasible, more so than in Milwaukee. This should make the grounds more seamlessly connect with the city and introduce a much more welcoming pedestrian connection. The design should also encourage visitors and residents alike to explore the entirety of the grounds, instead of trying to get in and out as quick as possible. 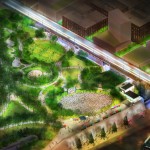 A look at how MVVA reimagines the north end of the grounds, near the Eads Bridge. 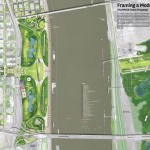 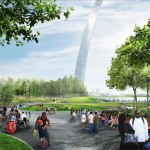 A look at how the freeway cap park will better connect the grounds to the city. 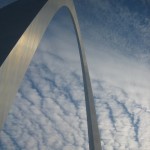 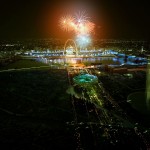 An overview rendering of the Behnisch team plans, this plan was not selected. 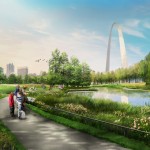 A rendering from MVVA’s plans for the Gateway Arch grounds. 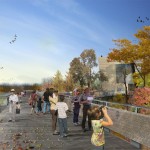 The winning MVVA plan for the east side of the river includes a wetlands area. 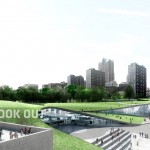 A rendering from the SOM team of the north area of the Gateway Arch grounds, this plan was not selected. 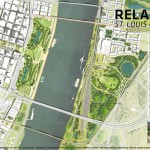 The site plan from the SOM team, this plan was not selected. 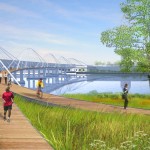 The Weiss proposal plan for a bridge to be placed in addition to the Poplar Street Bridge.