Milwaukee’s first bicycle plan came out in 1993. Since that time the city has realized most of the plan’s major recommendations and has added over 115 miles of bicycle lanes and routes to the city. The new plan lays out a Vision for Milwaukee 2020. That would include adding over 170 miles of new on-street bike infrastructure and almost 7 miles of new paved trails. 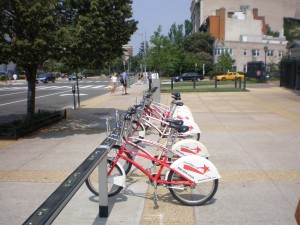 The plan still needs to be approved by the Common Council and signed by the Mayor.  To learn more about the plan there is a a public information meeting Wednesday July 14 from 4pm-7pm, with a presentation at 5pm, in the first floor conference room of the Zeidler Municipal Bldg., at 841 N Broadway.  Additionally, Dave Schlabowske, City of Milwaukee Bicycle and Pedestrian Coordinator, is running a great series of articles on the Bicycle Plan on his blog Over the Bars in Milwaukee.

6 thoughts on “Milwaukee is Moving Forward with New Bicycle Plan”