An Urban Benefit to the Smoking Ban 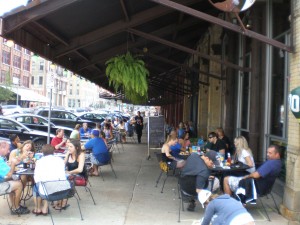 The indoor smoking ban goes in to effect in Wisconsin on July 5th, 2010, and certainly there are strong arguments on both sides of this issue.  Some claim “it’s to protect the workers,” or quite simply “don’t like smelling like smoke,” whereas on the other end of the spectrum the argument against the ban starts with “the government is taking my freedom,” and ends with “leave private business alone.”  Regardless of what side of this issue you’re on, lets be honest there are certain establishments that will be hurt financially by the ban.  For example, Casablanca on Brady stands out as a possible tavern that could be impacted, because of the establishments significant hookah business, but there are other establishments that might actually see an increase to their business, likely ones with existing beer gardens.  Leaving aside the fact that there will be winners and losers from this legislation there is a touch of risk to our neighborhoods, but more importantly there is also a potential benefit to Milwaukee’s built environment and public life.

Unfortunately conflicts between neighborhood residents and taverns will arise.  Taverns will need to be aware of the potential of more litter on our streets, and the likely increase of noise outside of taverns.  Clearly a balance will need to be found to manage the desires of the taverns and the needs of the neighborhood, but hopefully we’ll see our city leaders be open to more extension of premises requests, and tavern owners that properly manage the noise and litter around their facility.

If this balance can be found, a likely side effect of smoking ban will be more patios and additional sidewalk seating in Milwaukee.  In other cities, such as Portland, where similar legislation has been passed bars have addressed the ban by adding outdoor patios or seating, and here in Wisconsin some establishments have already responded to the upcoming ban by adding new patios.  Another example of this ban’s impact on street life is seen in a neighbor to our south, as Cudahy just moved forward with allowing sidewalk seating.  Outdoor dining, and drinking will add some noise to the city, especially during the summer, but that shouldn’t automatically be viewed as a negative as cities are lively places, and Milwaukee should strive to add more activity to our city, while balancing the concerns of neighbors.

Overall, this should be a positive to Milwaukee, as it will add more “eyes on the street,” enhance the built environment with new cafe seating, encourage the creative development of small urban spaces for active uses, and in the end bring more vitality to our streets.

18 thoughts on “An Urban Benefit to the Smoking Ban”