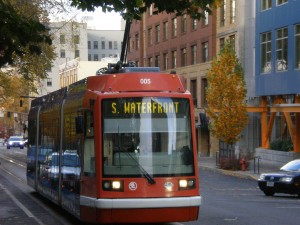 At the May 4th, 2010 meeting of the Common Council, Alderman Robert Bauman brought forward an item that would allow the City of Milwaukee to enter into a contract with an expert consultant, Jeffery Boothe, for the purpose of facilitating the next steps of the Milwaukee Streetcar project.  Jeffery Boothe is a principal at Washington, D.C.-based Holland & Knight LLP., a Vice Chair of Reconnecting American, chairs the New Starts Working Group, is an active member of the American Public Transportation Association’s Legislative Committee and Light Rail Task Force, is the Executive Director of the Community Streetcar Coalition, and has a long history of working on transit projects in municipalities across the U.S.

The plan of bringing Boothe in, is to facilitate moving the recently announced City of Milwaukee’s Streetcar proposal through the Federal Transportation Administration bureaucracy.  This help is of value because the FTA is unsure of how to handle Milwaukee’s project as it isn’t a typical New Starts Proposal, and his experience working with the FTA could speed up the process.  During the Common Council meeting Alderman Bauman explained that this hire is “simply enabling the city to negotiate the best possible deal with the FTA,” and that this is simply “committing money already budgeted.”  He later went on to add that “this individual will be advocating on our behalf,” and made clear that this contract isn’t about obtaining additional funds it is simply to assist in moving the current proposal forward.  Alderman Nik Kovac added that “it really will help to have someone who knows their way around the hallways of that bureaucracy.”

This proposal was approved on a narrow vote, will now go before Mayor Tom Barrett for approval, and should help move the Milwaukee Streetcar project forward.

One thought on “Milwaukee to Contract Nationally Recognized Transit Expert”