School of Freshwater Sciences to the Reed Street Yards? 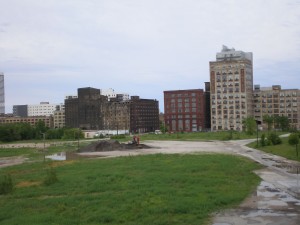 It was recently reported that UWM is considering the Reed Street Yards as a potential site for the School of Freshwater Sciences.  Although. I still think the lakefront site offers the most prominent location which would have played well with the re-branding of Milwaukee but, the Reed Street Yards site does have many positives that make it a suitable location.  Simply put, if UWM were to build on the Reed Street Yards it could play a significant role in the revitalization of a neighborhood.

Another site under consideration is the existing Great Lakes Water Institute on E. Greenfield Ave., but this site is actually the worst of both goals, branding and revitalization.  The area does need revitalization, but there just isn’t much of a neighborhood to revitalize as the site is fairly isolated.  Further, the existing Great Lakes Institute is in reality a former tile factory, not a first-class research facility.

While E. Greenfield Ave. is fairly isolated, the Reed Street Yards is located in the center of an area that has seen significant recent redevelopment efforts, and adding the School of Freshwater Sciences to the mix could build upon these efforts.  This area has a supply of office space, such as the recently redeveloped project at 234 W. Florida St., that could be utilized by start-up research firms.  The area also has affordable rental apartments for students and staff to live in.  In terms of collaboration MMSD’s headquarters is located adjacent to the site, and the city has already put forward a plan that would utilize TIF funding not just to build the needed infrastructure, but also includes financial incentives to help land the first water business.  The biggest concern, and possibly the show stopper for this site, is if the boat access is insufficient, but if that challenge can be surmounted this site could be successful.

As I said in a previous article “The re-development of the Reed Street Yards is the next piece of the puzzle to the revitalization of Walker’s Point,” and building the School of Freshwater Sciences here, not only makes sense, but could be what gets this effort rolling.

6 thoughts on “School of Freshwater Sciences to the Reed Street Yards?”