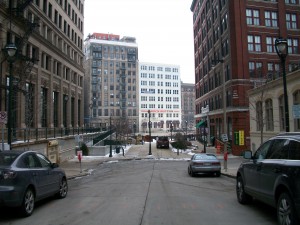 Cities in the Midwest will be competing for residents and tourists over the next century.  Unfortunately, it will continue to be difficult for Milwaukee to compete with the likes of Chicago in terms of sheer volume.  So Milwaukee needs to continue working to distinguish itself. Urban design and architecture are the most pragmatic way to accomplish this, as demonstrated by the Milwaukee Art Museum and Miller Park a decade ago.

Milwaukee’s beginnings offer the framework to continue to grow into an aesthetically distinguishable city.  During the genesis of Milwaukee the competitive nature of its founders, Solomon Juneau and Byron Kilbourn, manifested itself in the town’s street layouts.  The streets did not line up on opposite sides of the river.  A walk down Water Street reveals how the competition between Solomon Juneau and Byron Kilbourn created a multiplicity of vistas that can be used to beautify Milwaukee today.  Very few, if any, Midwestern cities have this advantage since the Jeffersonian grid system had wholly encompassed American Urban Planning by the time of any meaningful western expansion, leaving long straight streets with no termination opportunities even in high density areas.

The historic cores of many other Midwestern cities founded concurrently with Milwaukee have for the most part been destroyed.  The great fire of 1871 wiped out the historic core of Chicago where Grant Park exists today.  In St. Louis, the historic core was razed to make way for the Jefferson National Expansion Memorial (the Gateway Arch) in 1965.  While these new public spaces serve their communities well, the absence of historic cores presents Milwaukee with a great opportunity to showcase its urban fabric and unique block structure.

The fact that the most urban part of Milwaukee is still along the historic core with its many functions and multiple vistas should be studied and implemented in the current and future development of downtown.  The optimal component of beautifying these vistas is that most of the termination points also lie on the Milwaukee RiverWalk.  Creating a beautiful city, founded on the past looking toward the future, will set a good example for future generations to continue to contribute to the pleasant and sustainable urban environment in Downtown Milwaukee.

Matthew Trussoni, PhD, PE, RA is currently an Assistant Professor in and an alumnus of the Milwaukee School of Engineering’s Architectural Engineering Department.  After graduating MSOE he attended the University of Miami in Coral Gables, Fla. where he completed a dual master’s degrees program in the School of Architecture in 2005 earning the degrees of Master of Architecture and Master of Urban Design.  In 2009 he earned his Ph.D. in civil (structural) engineering in the Civil, Architectural and Environmental Engineering Department. His professional experience has encompassed both architecture and engineering as he is a Registered Architect and Professional Engineer in the State of Florida.