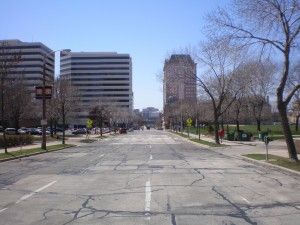 As key component of the downtown plan the City of Milwaukee set a goal of returning streets in the downtown area to two-way traffic. The idea is to make a street more pedestrian friendly and more logical for drivers. Making a street two-ways makes a street more convenient, can slow speeding traffic, and allows for more access and routes to be taken. The idea certainly is not to add as many odd quirks and novelties as possible. As part of this plan, efforts have been underway for years now to slowly convert State St. to two-ways, and fortunately another piece of the section of street will soon be added, the section of E. State St. from Van Buren St. to Market St.

Unfortunately, the design for the E. State St. leaves much to be desired, as the plan looks to have three significant shortcomings. Specifically, the potential for some parking lanes to be used as travel lanes during “peak” traffic hours, the lack of bike lanes on much of the street, and most critically having the two-way conversion end at Market St., instead of Water St., is wrought with issues.

The peak hour parking ban, which would allow for temporary travel lanes, adds issues for drivers and pedestrians, and points out an issue with the design process. On-street parking is important for pedestrians as parked cars create a safety barrier for pedestrians, essentially creating the feeling that the cars are a wall.  As far as drivers this would, albeit temporarily, remove parking from the street, but it would also put traffic at the curb which isn’t common in Milwaukee, and could add confusion.  Finally, in regards to the design process ideas like this prioritize a few minutes out of the day over the users throughout the vast majority of the day. It indicates this design came about much like developers plan parking lots for Target.  They plan, and therefore spend, for the extreme end points and not for regular use.

Another issue with the plan is the lack of bike lanes. Certainly, the road should not be widened to accommodate bike lanes, as it is plenty wide right now, but if bike lanes can be added from Prospect Ave. to Van Buren St. it seems reasonable they could be added all the way to Water St., or in this case Market St. As adding bike facilities when streets are being re-done is the most cost-efficient time to do so, it seems this could be a lost opportunity.

As problematic as these issues are the worst issue of this design is the conversion stopping at Market St. Unfortunately, the motivation behind stopping the conversion at Market St. is in itself a cause for concern, because it is clear that this has nothing to do with good design and everything to do with political pressure. It is evident that the lone opposition to make E. State St. two-ways was MGIC Corporation, and it certainly appears that last minute arm-twisting dramatically altered the design. The concern here, is that as the long-term goal is to make State St. two-ways throughout downtown does this concession now preempt the city from finishing the job in the future?

Hopefully, this is just a temporary setback and when the next phase of State St. is prepared to go to two-ways these issues can be corrected.