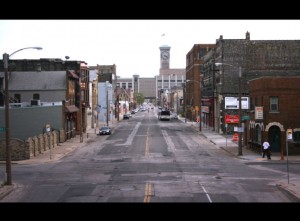 For over a year business owners, property owners, and residents in Walker’s Point have worked to have S. 2nd Street rebuilt with people in mind.  The plan, as UrbanMilwaukee.com has covered in past, includes narrowing the street from 58 feet to 50 feet, removing travel lanes, and adding bike lanes, street trees, and new lighting with the goal of creating a street conducive to multiple modes of transportation, be it walking, biking, or driving.  At the December 9th Public Works Committee meeting at City Hall, the plan was up for approval.

Department of City Development Commissioner, Rocky Marcoux, appeared before the committee to lend his support for the project saying, “we believe very strongly that this is the right way to go.”   Alderman Willie Wade gave his support saying “I think this is a great, grand idea.”  When referring to earlier concerns that this change might lead to increased congestion, he added “I hope we have traffic problems,” because as he explained traffic problems or congestion, generally indicates business activity on a street.   Representing the neighborhood Alderman Jim Witkowiak gave his support for the project and explained that S. 2nd Street “has all the bones to be a destination street.”

MMSD executive director Kevin Shafer spoke in strong support of the project, noting that MMSD has numerous employees that commute by bike to their location on S. 2nd Street daily, and went so far as to say that he wanted to “compliment the city on their design in this effort.”  He added that “It’s good for the environment, the economy and the social values of the region.”  Finally, he pointed out that projects such as this one can actually help MMSD “reduce the districts costs.”

Many property owners and stakeholders appeared and spoke in support of the project, citing improved aesthetics, environmental considerations, and the value they will receive for their tax payer dollars.  Ann Pieper, of Pieper Properties, summed it up well saying, “I believe it is the best use of our tax-payer dollars.”

Joe Sanfellipo, who was representing Walker’s Point Mobil and American United Taxi Cab, spoke in opposition to the project and questioned the traffic studies, but his most telling statement was when he said, “I’m the only person here speaking against the project.”

The street reconstruction was approved, with only Alderman Joe Dudzik voting in opposition, it will now go before the full Common Council on December 22nd.