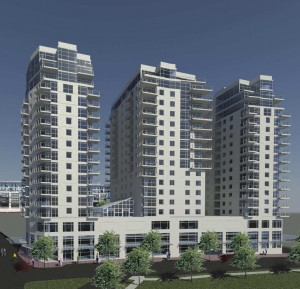 The $11 million Hide House project was the most hotly debated development project at the July 28th meeting of the Common Council, though the most significant action in terms of dollars was the approval of the Rivianna.  Additionally, the $10 million mixed-use Villard Square project, which will include space for 47 rental units and the Villard Avenue library was approved for construction.  It still is to be seen if these projects will actually break ground, but in the middle of this economic downturn the approval of $100 million of new construction is a positive sign.

Both the General Planned Development, and the Detailed Planned Development for the Rivianna project were approved at the Common Council meeting.  The $80 million Rivianna project consists of three 15-story towers, atop a 3 story base, that will include apartments, a hotel, and first floor retail. The developer, Rivianna Development Group, intends to break ground soon after obtaining financing, and has pledged to meet the requirements of the M.O.R.E. ordinance despite not requesting any city financing as of this time.  The associated file for the project were approved with only Alderman Bob Bauman being recorded as a no vote.

At the recent meeting of the Zoning, Neighborhoods & Development Committee the committee overruled a interim decision by the Historic Preservation Commission which designated the entire Hide House Complex as historic .  The ZND Committee found that only the buildings built in 1898 were historic, and removed the more recent buildings from protection.  Alderman Tony Zielinski, who has been working with neighbors to stop the Hide House proposal, made a motion to amend the ZND Committee’s decision and restore the historic preservation to the entire Hide House complex.  Despite the matter at hand specifically regarding only the historic designation of a property, not the proposed development, Zielinski continued his line of discussion regarding the lack of a public meeting saying “I think that just about every alderman here would want a public meeting.”  It is important to note that the proposed low-income apartment building is legally allowed under its current zoning.

Oddly, Zielinski pointed to Empowerment Village as a positive example of his intervention in development projects saying “we defeated that proposal for development along the river.”  He indicated that he helped the developer of the Empowerment Village find another site, and that the developer was content with the new site.  Although Empowerment Village was eventually able to be built, albeit as a smaller project than originally planned, in that case the property owner was the City of Milwaukee, whereas General Capital Group currently owns the Hide House property and has invested significant funds into the sites redevelopment.

Weighing in on whether or not the process use to split the historic designation was proper Alderman Bauman compared the Hide House complex to a single home saying, “it’s one address, one building,” and made the analogy that the home had various additions added to it after its initial construction.  He argued that “we’re saying part of the house is historic, part of the house isn’t historic.”  Because of this he argued that the motion made at the Historic Preservation Commission was the appropriate motion and added that “I didn’t think it was legally appropriate to split a parcel.”  This argument seemed to be a response to Assistant City Attorney Gregg Hagopian‘s statements at the ZND Committee meeting that indicated the designation of an entire complex wasn’t within the bounds of interim designation law, and that the law only allowed a single structure to be designated.

Alderman Jim Witkowiak explained that “we had this debate for three hours at committee,” and asked the council to vote against Alderman Zielinski’s simple amendment.  The motion to approve Alderman Zielinski’s amendment failed on a 4 to 10 vote.  This vote upheld the decision of the Zoning, Neighborhoods & Development Committee which will allow General Capital Group to begin the demolition of the existing structure and start work on the 60-unit apartment building.