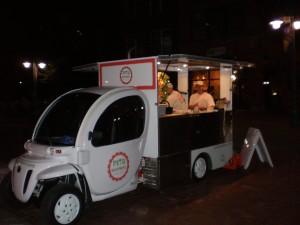 Great cities have great street food.  It is plays a role in the activation, the vibrancy, of the street life.  The vendors themselves play a role in encouraging and supporting this vitality by becoming a part of the culture, and the community.  The “Hot Dog Guy,” who operated on the corner of Wisconsin Ave. and Water St. for many years, created a bit of a spectacle on the street, a line thirty people deep formed, he banged away preparing their food, and there was constant chatter on the street.  Essentially, he has become a character in the downtown story.  It isn’t just about the convenience of grabbing a quick slice of pizza or a hot dog, on your way home from work, or after the bar, it’s about the interaction, the exchange, and the shared experience.

As great as the “Hot Dog Guy” was, for too long it seemed that all you could find in downtown Milwaukee was a hot dog stand, but things are changing.  Recently, Pita Brothers and Street-Za arrived both on our streets and on our computers.  These vendors can both be found on twitter (http://twitter.com/streetzapizza, http://twitter.com/pitabros) which allows them to notify customers where they will be setting up each day, or even minute-by-minute.  This added twist of connecting to the community through social media isn’t just good business, but it actually ties these vendors into the city more tightly by taking away the uncertainty of mobile food.

These street vendors also connect into neighborhoods, because they are small local businesses, not a formula chain food.  A look at Street-Za’s menu reveals that it includes slices targeted at specific neighborhoods, and other slices named after the people they’ve meet in-person and online.  For example, Street-Za has “The Walker’s Point Slice” that features salsa like sauce, chorizo sausage, and tortilla chips from Botanas.  Pita Brothers quickly established themselves as a staple in the Third Ward by setting up daily for lunch service in Catalano Square.  Additionally, Pita Brothers connects to the larger “green” community by serving food from their electric powered, zero emissions vehicle.

These two are just a couple of the new street vendors operating in Milwaukee, and hopefully they will be just two of a growing number of street vendors adding to the vibrancy of our neighborhoods.

UPDATE Another great new street vendor, Satellite Crepes, can be found on twitter as well: http://twitter.com/satellitecrepes