A Postcard Location for UWM’s School of Freshwater Sciences 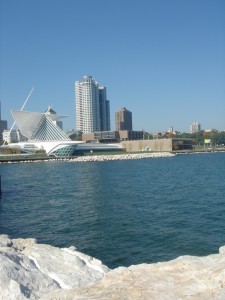 It’s certainly good that we value our parks, public places, and the lakefront, so a public debate over the appropriateness of placing UWM’s School of Freshwater Sciences on Lake Michigan is worth having, but the downtown lakefront is the right location.

Yes, other sites have been suggested, such as the vacant land near the Milwaukee Water Works purification plant on Lincoln Memorial Drive, the port-owned property near the Lake Express terminal, the parking lots just west of the Henry W. Meier Festival Park, sites near the existing Great Lakes Water Institute, and even the Port of Milwaukee Headquarters, but building the facility on any of these sites won’t give the new school the prominence of place the way the Pieces of Eight location will. Unfortunately, it would just be another example of when Milwaukee does something half right.

The Great Lakes Water Institute has been operating in one form or another since the 70’s, at 600 East Greenfield Avenue, and certainly has been involved in important research, but during that time Milwaukee’s hasn’t become the focal point for water research. Of course there are a lot of factors that have held back the institute from rising to greater prominence including the lack of proper funding, and the need for a graduate level school, but also hiding it away where it isn’t visible, where it isn’t prominent, and where it isn’t integral to Milwaukee and Lake Michigan detracts from its ability to be the symbol of Milwaukee’s commitment to water research.  Locating the School of Freshwater Sciences near the Milwaukee Art Museum and Discovery World right on Lake Michigan will only add to its prominence, and help to insure its place as part of Milwaukee’s new image.

If Milwaukee is to become the water capital of the world, then its leading institution needs prominence and visibility. You might say it needs a postcard location.

To learn more about this proposal and possibly lend your support, the Harbor Commission will be holding a public hearing Thursday May 28th, at 6:00 pm at City Hall Room 301-B, 200 E. Wells St. on this proposal.