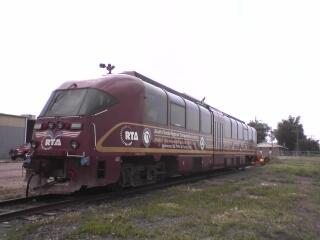 Colorado Railcar Manufacturing, the company slated to provide the train sets for the potential Kenosha-Racine-Milwaukee (KRM) commuter rail line, has closed its doors due to a liquidity problem.  The company was the only supplier of diesel multiple unit (DMU) trains that met FRA standards to operate on the same tracks as freight trains.  So the battle over a recently released (and highly-flawed in our opinion) cost report might have to be tabled at this point.

Does this mean that the KRM line has no chance of going forward?  Absolutely not.  We still think Governor Jim Doyle should include the ability for the RTA to collect up to a .5% sales tax in his budget proposal, due out sometime in mid-to-late January.  The lack of an American manufacturer of DMU’s that meet FRA’s standards is a void that will likely be filled by the market, especially as more and more metro areas aim to start new commuter rail programs.

To understand the importance of Colorado Railcar, it’s important to look at the laws and options surrounding transit systems.  Fortunately Fred Hanson, General Manager of Tri-Met in Oregon, wrote a great article breaking down why DMU’s from Colorado Railcar are important to new transportation systems.

Fact No. 1: In purchasing the railcars for WES, TriMet had to comply with the federal Buy America law. Only one American firm — Colorado Railcar Manufacturing — manufactures the vehicles we needed.

Fact No. 2: The Diesel Multiple Unit trains selected for WES are the only ones that meet federal safety standards allowing commuter trains to operate with active freight trains. Portland & Western Railroad controls the tracks upon which the WES trains will operate, and the company required that freight trains continue to operate on the tracks along with commuter trains. The DMU trains were also selected for this corridor because they provide for ease of operation (an operator cab at both ends), their size fits the Beaverton Transit Center, and TriMet can add future service outside the current “rush-hour only” schedule and safely share the tracks with freight trains.

The Buy American law appears not to be the only thing keeping foreign DMU train sets off American tracks.  They apparently do not comply with FRA standards that require the trains won’t crumple in a high-speed collisions.

I think it’s time for the state of Wisconsin and the City of Milwaukee to look at supporting Super Steel, our local railcar manufacturer (for clients such as Metra) to become a manufacturer of DMU trainsets.  Not only may it position Milwaukee to be a leader in the industry, but it will put more people to work in Milwaukee.