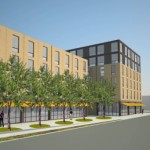 Bob Monnat, the chief operating officer of Mandel Group, gave a short presentation covering the history behind the development of this site.  He explained that Mandel Group had originally planned to take advantage of the stunning views from the site and create a commercial use development.  When UWM put out the RFP for a new dormitory Mandel Group responded after determining this could be a better fit for the site.  Throughout the efforts the building was set back 50 feet and limited in its height.  He explained that as the project evolved through working with the Milwaukee River Work Group and other community members that “we actually ended up with a better project.”

Jim Shields, the project architect, reminded the commission and residents that “one of the big stories here is, I think an environmental or green story.”  He was referring to the numerous green features that this project utilizes to create a sustainable development.  These features include the project being a high-density development, that has good transit access, green roofs and rain gardens.  He also pointed out that project is very likely to receive LEED Silver certification.

A group of residents spoke in opposition to the project for a variety of reason including, parking, protecting the river, and concerns over too high a “student density.”  Teresa Kinis, the Chair of the Riverside Park Neighborhood Association, spoke in opposition of the project because of her concerns over the impact of the new students on the river saying it is “the problem of student density” that she is concerned about.  Pam Frautschi, spoke in opposition with her concerns revolving around the potential impact of the increase in population density on the neighborhoods.  Else Ankel was opposed to density as well arguing that it would hurt the river and then directed her comments to Alderman Kovac saying, “I urge you to listen to the people who elected.”  Joe Klein, who was representing a new coalition of neighborhood association’s called 3DNA, argued that “this is the wrong building, in the wrong place.”  He explained that the group felt this would be precedent setting and that the dorm would be too dense.  He also remarked on the process saying “we don’t feel that we’re fully engaged with the university.”

Sura Faraj appeared to insult commission members saying “I’m not sure why each of you are on the commission, perhaps it’s because you truly want to see better development in this city, and give a voice to the citizen perspective, or maybe it’s just to put another notch in you resume belt.”  Although she has been a member of the Milwaukee River Work Group, she questioned the group’s efforts saying they held “closed door meetings” with the developer regarding the project.  She went on to say that “high density development should never abut a primary environmental corridor” but didn’t give any reason as to why this would negatively impact the river.  She ended with a long rant about the need to protect water because it is the new oil but again didn’t explain how this project would negatively water quality.

On the other side there were a variety of residents, local business owners and contractors that spoke in favor of the project.  A number of local contractors explained that the recession has had dramatically negative impacts on their business and employment levels in the city.  Tony Arteaga, the Owner of Artega Construction, spoke in favor of the project explaining that his company has gone from 150 to 30 full time employees and as he said “a project like this is desperately needed in the City of Milwaukee.”  Two other contractors indicated that the are experiencing the same issues and added that as EBE certified contractors these job would help central city residents.  Sheldon Opppermann, a resident of Cambridge Woods, lent his support to the project explained that “the university is what attracted me to the neighborhood” and that “this is the best answer to absentee landlords.”  Ann Brummitt, Coordinator of the Milwaukee River Work Group, expressed some concerns but did express that “yes it [the project] does indeed respect the guidelines.”

Jim Plaisted, the East Side BID Executive Director, explained that the BID board of directors voted unanimously to support this project and they are working to negotiate a voluntary donation from UWM to the East Side BID.  He also presented a letter from the owners of Ma Fischer’s Family Restaurant explaining how their business has increase significantly since the opening of the Kenilworth dormitory.  He argued that this increase in business wasn’t about more students but was about more population density in the general.  He summed up the importance of this project to the retail business on North Avenue saying “retail, follows residential its not the other way around.”

This change in zoning was approved by the commission.