How close are Christie’s and Chipstone? Consider this:

The purchaser was Leigh Keno, familiar to viewers of the Antiques Roadshow, where he is much celebrated as an expert on American Furniture and Decorative Arts along with his twin brother Leslie.

Leigh Keno is himself a former Christie’s employee, and has advised the Chipstone Foundation in the past on furniture purchases.

Milwaukeeworld will have much more on this highly intriguing deaccession after further research. 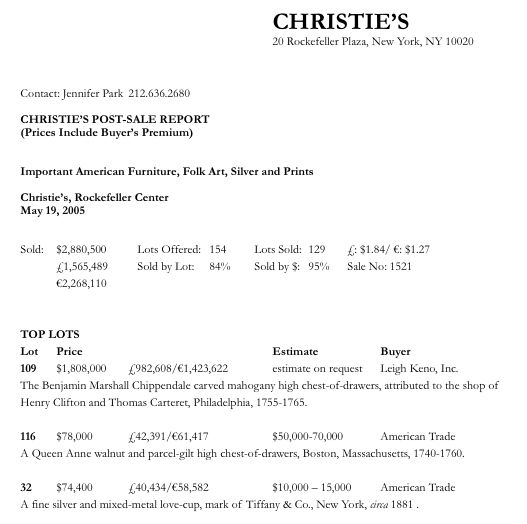 Q: Difference Between Nixon and Barrett?

Would you buy a used car from this man?

Update: From the May 19th Press Release

Department of Public Works Fleet Goes on the Auction Block

Milwaukee—Mayor Tom Barrett announced today that Department of Public Works vehicles will go on the auction block this weekend. There will be 86 pieces of City equipment for sale. The live auction will take place Saturday, May 21st at 9:30 a.m. People can inspect the vehicles and equipment Friday, May 20th, 1:00-4:00 p.m. and Saturday, May 21st, 8:00-9:30 a.m. at 10320 W. Watertown Plank Road, Wauwatosa.

Sales Manager Paddy Curley says Tommy’s put 86 vehicles on the auction block this weekend and they’ll be priced to move.

The automobiles are in great shape, since they were rarely subjected to the rigors of municipal work. In fact, many rate as gently-used personal vehicles. 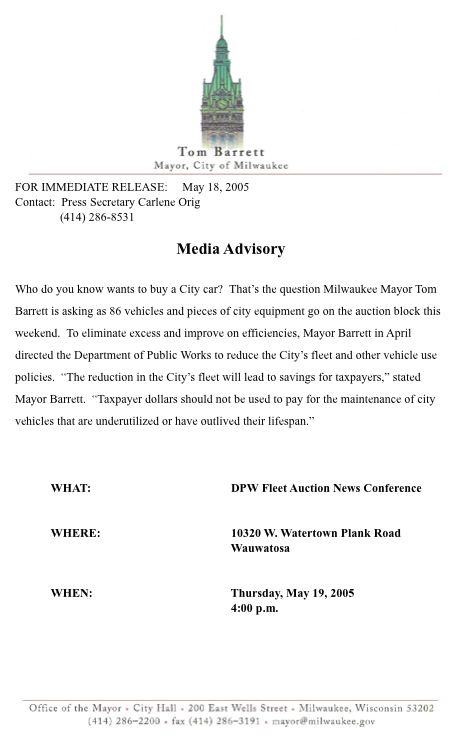 Why is Milwaukee’s Richest Museum Selling a Masterpiece? 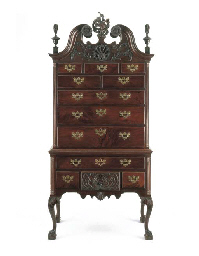 The Chipstone Foundation is perhaps Milwaukee’s best-endowed cultural institution, greater by a factor of 10 that of the Milwaukee Art Museum, where a few of its treasures are displayed for the common folk to enjoy.

The foundation, which is considered one of the finest collections of American decorative arts has placed one of its highly important pieces on sale at Christie’s auction May 19th.

The piece, known as the “Benjamin Marshall Chippendale Carved Mahogany High Chest-of-Drawers, Attributed to the Shop of Henry Clifton and Thomas Carteret, Philadelphia, 1755-1756,” is offered with another 154 lots of American Furniture and Decorative Arts from other sources.

All the other items in the sale have price estimates in the four or five digits. The Marshall piece will sell for much more; Christie’s will only say that an estimate is available “on request,” but a search of its website shows an estimate of “$1,200,000 to $1,800,000.”

Chipstone acquired the piece, which has a very well documented history, sometime in 1995.

The Metropolitan Museum of Art, a plausible buyer, once offered to purchase the piece for $32,000 – but that was in 1929, and would have placed its value at the time among the very highest of any piece of American furniture.

According to the auction catalogue, “The Benjamin Marshall high chest stands among the most exceptional examples of the form, and the most intact and magnificent example to come on the market in decades.”

So why is Chipstone selling the piece?

The Foundation’s Statement of Purpose says it is to “maintain and preserve the collections of American furniture … assembled by Stanley Stone and Polly Stone during their lifetimes.” (Stanley Stone died in 1987; Polly Stone on May 21, 1995.)

Thus, this piece apparently was bought after the Stones’ deaths.

Another mission of the foundation is “to enhance and expand those collections by accessions of the highest aesthetic quality and historical significance appropriately related to the fields in which the Chipstone collections have been concentrated.”

Oh, well that explains everything. The Chipstone Foundation is selling “the most intact and magnificent example to come on the market in decades,” so it can spend the money to buy “accessions of the highest aesthetic quality and historical significance.”

Something does not smell right here.

If Chipstone already has the “most intact and magnificent example” of an item directly related to its mission, it makes little sense to sell it, especially if the products available on the marketplace are inferior.

But there will be lots of money involved, including dealers’ commissions and auction house premiums. The network of dealers who have dealt with Chipstone is a small one, and an incestuous one. Chipstone has even bid against itself in an auction in at least one instance, costing the foundation thousands of extra dollars for a purchase and filling the pockets of its dealers, who of course, like to remain friendly with wealthy foundations.

I called Jon Prown, the Chipstone head who lives next door to the foundation in a million dollar house bought for him, but he did not return my call.

Elections Board to Walker: Fess Up

According to a letter dated May 12th , which we posted here immediately at milwaukeeworld, Scott Walker has ten days to tell the State of Wisconsin Elections Board his explanation as to why a legally required disclosure did not appear in a battery of automated telephone calls his campaign placed to 40,000 Milwaukee area voters on November 4, 2004. The calls were intended to gain support for Walker’s budget plan.

Walker’s campaign treasurer John Hiller wrote the board on November 5th that “when the call was recorded, it did include disclaimer. However, when the calls were placed by our automated call vendor the disclaimer was inadvertently omitted from the call.”

In other words, “the dog ate my homework.”

Sounding as much like a high school vice principal as an attorney, George A. Dunst, legal counsel for the board wrote in the May 12th letter:

“The Elections Board requests that a sworn, written response to the complaint [by Supervisors Weishan and Broderick] be filed with the Board … within 10 days of the date of this letter.” {emphasis original}

Dunst then gives Walker a list of questions to answer:

“What is the name of the ‘call vendor’ who inadvertently omitted the source identification (disclaimer) from the call?”

“What was the message that was recorded and teleplayed and was anything other than the source identification (disclaimer) omitted from the message?”

“Has the call vendor explained how the source identification was omitted?”

“If so, what was that explanation?”

“Over what period of time were the calls placed to Milwaukee County residents?”

It appears once again that Scott Walker has something to explain. Once Walker’s letter is received by the board, we’ll post it here.

Walker will be asked to appear before the State Elections Board in Brookfield on or about July 12th . It will be hard to turn that appearance into a campaign event or positive photo op.

Source of Walker’s Questioned Calls Revealed — What a Coincidence!

George Dunst of the State of Wisconsin Elections Board (see related story) has asked County Executive Scott Walker to identify the firm that placed telephone calls for his campaign.

Although it is amusing to note that Mequon is in Ozaukee County, it is also true that that county produces most of Walker’s supporters.

More interesting, however, is that campaign treasurer Hiller also has used the same address for the campaign

I’ll pop in the next time I’m back in the hood to visit mom.

Elizabeth Brown, the facilities manager of the Milwaukee Post Office took a voluntary demotion recently. The Post Office did not reveal the reason for her demotion, but it is believed she diverted expense funds for personal use and furnishings for her house. Brown has a lot of relatives on the Post Office payroll in Milwaukee, as well.

The first school I attended in Mequon was Range Line School, and it was the only one I ever went to that was older than I was. Now, after 56 years of educating the elementary students of southeast Mequon, Range Line Elementary School is closing its doors.

The school, 11040 N. Range Line Road will be holding a “Reception and Open House to Celebrate 56 Years of Educating Children” on Monday, May 23rd from 7:00 to 8:30 p.m. The staff has dug through the files of the school and promises to have many mementos, photographs and scrapbooks on display to embarrass its former students. My former classmate David Waldheim, now a teacher himself, told me about the event and I thought I’d pass on the news. So, fellow Range Lineans, I hope to see you there. For more information call Linda Kriplean at 1 262 238-7537.

President Bush will be in Milwaukee, this Thursday, May 19, at 11:25 am, at the Milwaukee Art Museum.

Here in full are facsimiles of the letter sent by the State Elections Board to the Walker campaign. 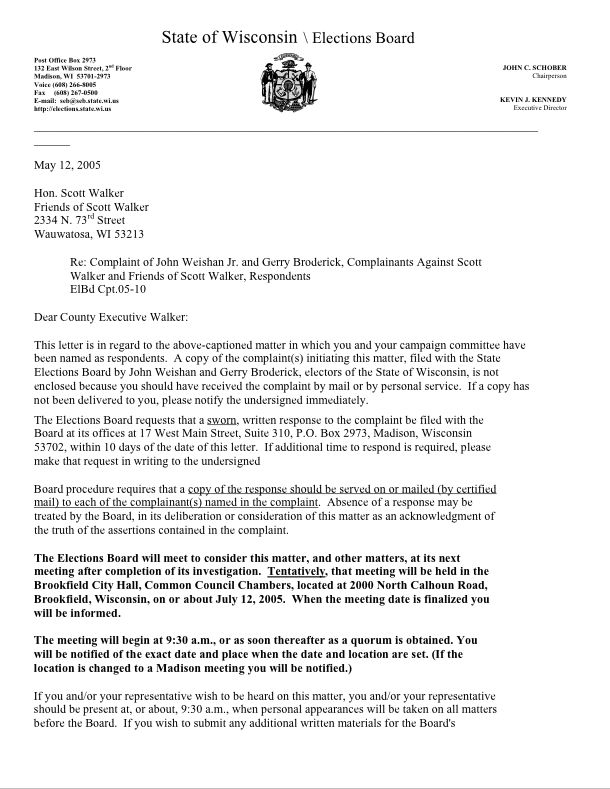 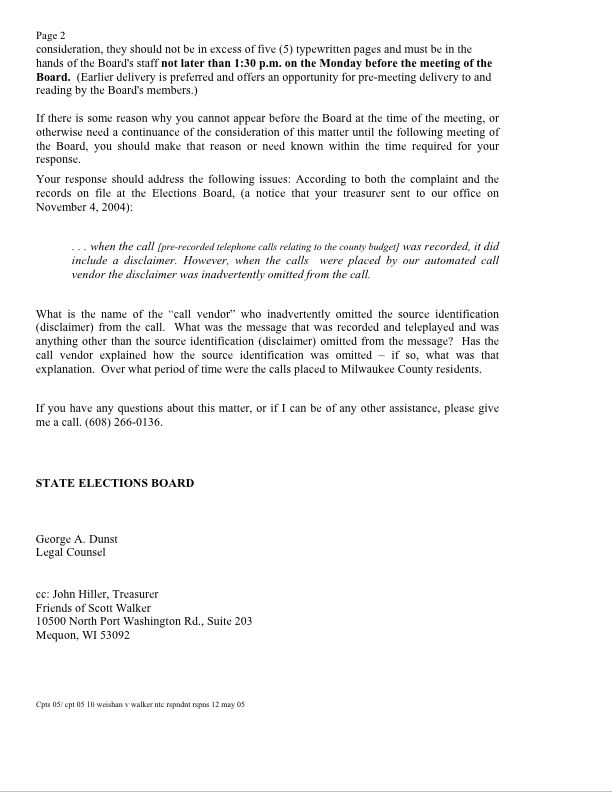 “Scott Walker has tried to pawn himself off as a reformer, but time and time again he’s proven that he is part of the problem,” said Weishan.  “Since becoming County Executive, Scott Walker has habitually broken the law and misused taxpayer money to further his political ambitions.”

The official complaint outlines specific details of how Scott Walker’s campaign illegally used campaign resources to communicate with 40,000 Milwaukee County residents while failing to include the identification of the political committee that paid for the communication.  Walker admitted in a subsequent Milwaukee Journal Sentinel article that the campaign had paid for the calls and the disclaimer had not been included on the calls.

Wisconsin law clearly defines anonymous communications paid for with campaign funds as illegal and lays out both civil and criminal penalties to address these transgressions.

A complete copy of the PDF format complaint