“Well, if I was a consumer I would say, “Why in the hell is the United States No. 13 and heading south in broadband deployment? Why are folks in Korea and Japan maybe getting 10 times the capacity at a half or a third or a quarter of the price? I am paying for the slow setup I’ve got–that is called high-speed broadband?”

I don’t think there is that much satisfaction with the situation we’re in…I think we may be probably the only industrial country on the face of God’s green earth that doesn’t have a national plan for broadband deployment. We recently got a commitment on a goal, on an objective. But an objective and a strategy are two vastly dissimilar things.”

— Michael Copps, one of two Democrats of the Federal Communications Commission’s five members on the sad state of internet connectivity in the United States.

The Commission did the consumer little favor last week when it ruled that the telephone monopolies are not obliged to debundle their telephone service from their high-speed internet service, after several states, including California, made moves to do so.

(Tell me – of the people under thirty that you know, how many have a landline telephone at home?)

Opponents of the FCC’s ruling point out that DSL provides easy access to Voice Over Internet telephony, rendering the landline redundant. The FCC, however, seems more concerned that the telephone companies be able to charge customers for these unneeded services, thus propping up the bottom line of a dying industry.

Now comes word that the telephone companies plan to compete with cable providers by offering television over their DSL lines – one more insidious step in the communications industry toward content provision, where the companies should stay to their roots as common carriers.

The United States, by some measures, has slipped to 13th in the world in its economic efficiency. Places like Hong Kong, Singapore and New Zealand offer far faster internet at a fraction of the cost in the United States of America. We are slipping on the global stage thanks to the stranglehold the telephone and cable companies have on the “last mile” of our telecommunications infrastructure – the connections which they control and zealously guard that provide the potential for all Americans on whatever side of the digital divide to connect to the powerful resource that is broadband internet.

The Milwaukee Water Works, in attempt to collect revenue more efficiently, is working on a new customer billing service that should be in place by June. Business Manager Earl Smith was not available to answer questions at press time, but the Water Works, owned by the City of Milwaukee, will also be implementing an e-billing system that will enable customers to pay their bills electronically. Just another efficiency for the ratepayers.

An Evening With the Governor

You are invited to “an Evening with Governor Doyle” from 5:30 – 7:30 p.m. (if you call that evening) at the new club Saketumi at 714 N. Milwaukee Street on Thursday, April 7th . The suggested contribution, $100, should get you plenty of something, even if it only is face time with the great man. … Where’s the MO-ney? On Thursday, Mo’s Cucina is hosting a party for Ald. Bob Bauman, the downtown alderman. Jim Witkowiak, the south side alderman will have an event at the same time at Mo’s Irish Pub, right next door… If you would rather go to a morning event, then what could be more refreshing than a “Breakfast Event Honoring Senator Alberta Darling,” on Friday, April 8th , from 7:30 – 9:00 a.m.? (Please do not answer that question.) The cost is only $100 per person for the Milwaukee Athletic Club event. With prices like that, you can’t go wrong!

Architect James Dallman wrote to say that the concrete pouring is underway at the Holton Marsupial Bridge. The extensive falsework has been in place for some time at the fascinating span. Stroll by and take a look. Dallman also added that he is somewhat wistful about the changes made to his original plans for the Kilbourn Tower. Dallman and his wife Grace La provided the design for the highrise, but were removed from the project when it changed developers. The couple were later awarded a six-digit settlement for their work. The building resolves several design issues relative to its site and size. The west façade provides a particularly interesting pattern of windows. Thirty feet away, the University Club Tower is taking root somewhat slowly, with ample views of the city, the lake – and The Kilbourn Tower.

Last November we told you about a suspicious firm that puts on auctions around the country. The company’s name is United States Liquidators, and its website is quite skimpy, particularly compared to legitimate auction houses. We told you to beware of the firm, but apparently that message came too late for a woman in Indiana who writes below:

Hi, my name is Lori…

My husband and I have been researching “United States Liquidators” as you had on your website a complaint about them selling fake artwork at an auction. The title of your article was “Fishy Auction”. It was in Nov. 2004. We too bought $9,000.00 worth of “Fakes”. We purchased a Chagall, a Pino and a coin, unknowingly. We have stopped payment on our credit card and have contacted BBB,FTC,Attorney Generals etc. We have letters from overly qualified art appraisers (appraisers for the Indiana Museums) stating all the proof necessary to our claim. Just wanted to inform you that they are continuing to “Rip Off” the consumers. One woman at the auction spent $43,000.00 on one painting! Poor woman! The auction we attended was in Indianapolis Jan. 31, 2005. The company is refusing to speak with us about this matter any further.Just wanted to give you a follow up to that article. If you have any questions or know anyone else that this company has deceived…please email me asap 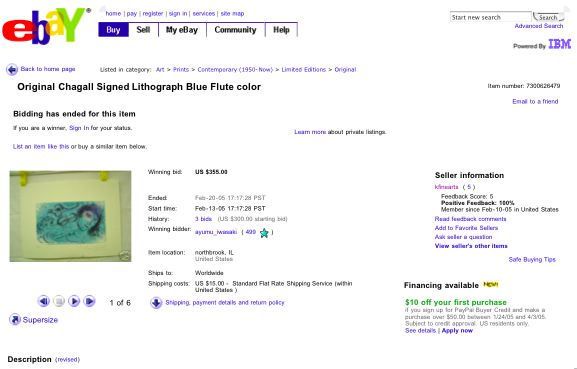 James Kennedy, the art dealer from Northbrook, Illinois who was found guilty of possessing fake Picassos and other artworks in Milwaukee County last year allegedly has not let himself be deterred from spreading more forgeries upon the face of the planet, according to this email from a reader:

James Kennedy came to mind a little while ago as I was searching on eBay. I found some listings for prints which made me suspicious. The seller (who is “kfinearts”) is located in Northbrook, Illinois. Some of the items looked like fakes to me, although I couldn’t be 100% sure. Also, the prices seemed too low. I wrote to the seller about one item. He responded and gave his name as Jim Kennedy. Perhaps he is the notorious James Kennedy. This seller has sold a few prints. Here is the link to one item. You can check the feedback for other items that he has sold there.

In the feedback section, you will find two Miro prints which are identical and have the same number. But that could be just a mistake in the listing.

Never mind the duplication, the buyers seem content. Raua105 paid $200 for one of the Miros (23/225) and enthused in the buyer feedback forum, “thank you for a good item! Delivered quickly!!”

Assistant District Attorney Kurt Benkley, who prosecuted Kennedy for forgeries that were described in court as “laughable,” when informed that Kennedy had been active on eBay since February 10, 2005 said, “why am I not surprised?”

Unfortunately, Benkley says the arm of the Milwaukee County District Attorney does not extend across the Illinois border. “I can’t prosecute Kennedy unless one of the purchasers is in Milwaukee County.

“Perhaps you could contact the Illinois Attorney General’s office and see if there might be an interest there.”

Well, as a first step, we’ll post this on milwaukeeworld. Please use the internal search engine to check on previous milwaukeeworld stories about James Kennedy.