In 1964, Marquette University planned to award an honorary doctorate to Martin Luther King. Somehow word leaked to an FBI special agent who communicated the news to Washington.

Not long after, Marquette decided not to award King the degree. The University’s files on the subject remain closed, but reference to the matter is made in a congressional report by the Select Committee to Study Governmental Operations issued on April 26, 1976.

According to the report, the “Church Committee,” as it was commonly known, “finds that covert action programs have been used to disrupt the lawful political activities of individual Americans and groups and to discredit them, using dangerous and degrading tactics which are abhorrent in a free and decent society.”

The report noted that Marquette University and Springfield College were both planning to offer King an honorary degree in 1964.

The FBI, then under the control of Racist J. Edgar Hoover, sprung into action. Note the telling detail in the report’s footnote #71: “The Bureau had decided that it would be ‘shocking indeed that the possibility exists that King may receive an Honorary Degree from the same Institution (Marquette) which honored the Director with such a Degree in 1950.’” (Memorandum from F. J. Baumgardner to William C. Sullivan, 3/4/64.

Apparently the political pressure worked, and it is a sad footnote to the history of Marquette University that its honor was bestowed upon J. Edgar Hoover, and not Martin Luther King.

Art Dealer With Felony Asks for Another One

Marilyn Karos, by far the scariest art and antiques dealer in the area is facing another felony from the United States Attorney’s office, this time for attempting to “corruptly endeavor to influence, obstruct and impede the due administration of justice in the case of Richard O’Hara v. United States,” according to a U.S. grand jury indictment signed January 4th.

O’Hara, now serving a 10-year sentence in a federal penitentiary in Rochester, Minnesota, was Karos’s co-defendant in a 2001 Interstate Travel in Aid of Racketeering to commit extortion and conspiracy to possess stolen property case. Karos pled guilty and served seven months in prison.

The case was a famous one, in which $2 million in antique navigational devices, stolen from the Rome Observatory, were the center of a bizarre case that included an assault in Karos’ Whitefish Bay home by O’Hara on a fellow named Zakria El-Shafei, who had refused to return the treasures after promising to sell them for O’Hara. (We’ll get to El-Shafei, a dirty dog criminal, another time – the Milwaukee Journal Sentinel has missed at least five good stories about him, and he is believed to have fled the country.)

Anyhoo, in mid-April, 2004, Karos was eager to be reunited with O’Hara, her lover. She met in Chicago with James F. Kosi, a government witness at the O’Hara trial who was a participant in the beatings. Karos had spent four months searching for Kosi, she said. and when she found him, she asked for his help in signing a false affidavit. The affidavit would claim that the November 22, 1997 assault on El-Shafei, upon which the government based its case, had never happened.

Kosi, who had learned his lesson, immediately contacted the FBI, and was advised to have no further contact with Karos and to report any attempts by Karos to again contact him.

She did, the next day, and several times again. In every instance, Kosi tried to avoid her. By July, the FBI entered the case, and recorded conversations between Karos and Kosi. On July 29, 2004, she offered Kosi $56,000 to sign the false affidavit. Kosi asked for $75,000.

On September 10, Karos offered Kosi a $2,200 downpayment, and Kosi, with the FBI listening, agreed to meet her. Later that day, Karos gave Kosi $2,100 and he signed the affidavit, claiming he did so only because she was paying him, and that the affidavit was false.

By September 17, Assistant United States Attorney Tracy M. Johnson received a copy of a petition for a rehearing filed by O’Hara in the Seventh Circuit Court of Appeals. A copy of the false affidavit was attached as an exhibit.

This then led to the charges against Karos, which are pending. 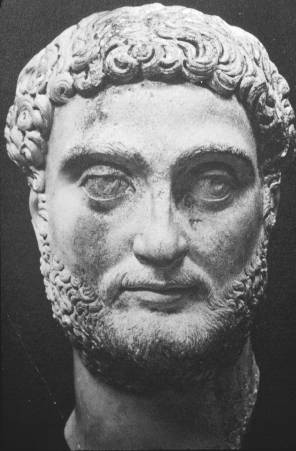 Details are scarce, but it appears the Milwaukee Art Museum has received as a gift from the Pieper family a Second Century A.D. Roman marble portrait of the era of the image seen above.

The museum’s bust is probably from the Eastern Empire, where the finest sculptors of the time worked.

According to sketchy museum information, the “impressive portrait of a high ranking private citizen was carved during the late Hadrianic or early Antonine periods, sometime around the first half of the second century.

“The head was once inserted into a monumental standing figure. The workmanship is exquisite.”

There are no restorations or repairs.

The museum will unveil the gift at the time of its choosing, which we hope to relay to you at milwaukeeworld.com,. your source of art news. It will likely be placed near the headless torso of a similar era.

Our friend James Kennedy will find it a bit difficult to peddle his fake “Picasso” drawings and other spurious artwork this year.

According to Mia Cocroft, a specialist with the District Attorney’s office, “On January 7, 2005, the court has found the defendant guilty and sentenced the defendant to 1 year in the House of Correction.”

I got this off Wonkette.com. I called the number of the Mississippi State Tax Commission (601) 923-7000. The message says that the office is closed Monday in observance of Robert E. Lee and Martin Luther King birthdays. Our Southern Friends can be ever so gracious, can’t they?

United Water Services, we are continually reminded, is expected to save Milwaukee Metropolitan Sewerage District ratepayers some $140,000,000 by the end of its 10-year contract in 2008.

You could save money too, if you didn’t have to pay for your vehicle license plates. Welcome to the world of public-private partnerships where ratepayer vehicles are operated by a private firm.

Perhaps you have seen the United Water Services, Inc. trucks and vans. They are labeled with the company’s logo, yet their license plates are government-issued municipal ones.

Why, I wondered, is a private company driving around town with municipal plates?

Believe it or not, there is an answer.

As part of the agreement that gives UWS the right to operate our sewerage treatment system, it was able to use vehicles owned by MMSD. Right now UWS uses 84 vehicles, mostly trucks and vans, owned by MMSD.

It is unclear from information provided by Steve Jacquart of MMSD whether UWS in fact owns any of the vehicles it uses, or if they were all provided to the private firm by the ratepayers as part of the agreement.

Nor has the cost to the ratepayers for this service been released at this time, but one must wonder why doesn’t UWS buy its own vehicles like most private companies.

However, the fact that the ratepayers own the vehicles allows UWS to drive its 84 trucks around town with free municipal plates. Who wouldn’t like that kind of deal? Oh, yes – maybe the taxpayers wouldn’t.

So why doesn’t MMSD have its logo on the UWS trucks to alert the public that it owns the vehicles?

Apparently, it is a money thing. According to Jacquart, “at contract commencement, UWS was given permission to place their logo on the MMSD vehicles used by them. MMSD could put its logo on these vehicles, in addition to the UWS logo, at MMSD’s expense.”

Doesn’t make you long for the days when the government was not in the truck-leasing business? Aren’t there regulations regarding the proper signage to appear on leased commercial vehicles? (There are. Just read a semi some day.)

Attorney Andrew J. Shaw, a 1992 Marquette University Law School graduate, says he plans to start a new weekly newspaper in Milwaukee. He has hired Michael McGraw to be the editor.

According to Shaw, the public is being ill-served by the lack of issue-dominated news coverage.

The first issue, which is expected by the end of the month, will concentrate on the issue of media consolidation. The next issue will provide a glimpse into the workings of the legal system in Milwaukee.

The paper advertised for writers on the craigslist website. Shaw says the first issue will have a circulation of 20,000. At this time the publication operates from space at Shaw’s law offices at 6815 W. Capitol Drive.

This would be the second new weekly newspaper in Milwaukee since the late-2004 launch of MKE, a product of Journal Communications. The field is dominated by the Shepherd Express.

Another Run for Bryan Kennedy

Bryan Kennedy, the UWM professor who ran against entrenched Republican Jim Sensenbrenner in a spirited race for Representative, has told friends that he plans to run again in 2006, and would like to raise $1 million to do so. Kennedy released the news in an email to supporters. He is in Brazil at this time, which is appropriate for a Portugese professor, or anybody else who resides in this miserable clime.