The free event will feature a massive movie-screen broadcast of the NFC Championship Game synced to the radio play-by-play broadcast on 620 WTMJ. 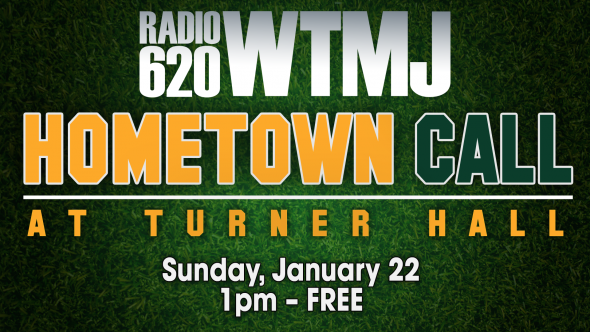 WTMJ Radio, the Flagship station of the Green Bay Packers, presents “The Hometown Call at Turner Hall” viewing party on Sunday, January 22, 2017.  The free event will feature a massive movie-screen broadcast of the NFC Championship Game synced to the radio play-by-play broadcast on 620 WTMJ.

WTMJ Director of News & Programming, Eric Brooks, noted “We look forward to Wayne throwing a ‘Dagger’ in front of hundreds of rabid Packers fans this Sunday.”

Full bar and tailgate food including burgers and brats will be available for purchase. Each time the Packers score, WTMJ Radio will giveaway Packers gear, concert tickets from the Pabst Theater Group and other prizes.  The event is free and open to the public.  The doors open at 1pm and the kickoff is scheduled for 2:05pm.

About Scripps
The E.W. Scripps Co.pany (NYSE: SSP) serves audiences and businesses through a growing portfolio of television, radio and digital media brands. Scripps is one of the nation’s largest independent TV station owners, with 33 television stations in 24 markets and a reach of nearly one in five U.S. households. It also owns 34 radio stations in eight markets. Scripps also runs an expanding collection of local and national digital journalism and information businesses, including satire and humor video and web brand Cracked, podcast industry leader Midroll Media and over-the-top video news service Newsy. Scripps also produces television shows including “The List” and “The Now” and runs an award-winning investigative reporting newsroom in Washington, D.C. Founded in 1878, Scripps has held for decades to the motto, “Give light and the people will find their own way.”

Béla Fleck My Bluegrass Heart Comes to the Riverside Theater