Public Policy Isn’t The Only Thing They’ll Auction Off

MADISON, Wis. — At their annual state convention this weekend, Gov. Scott Walker’s Republican Party of Wisconsin (RPW) will be charging $50 per person for a “pay to pray” breakfast on Sunday. In exchange for their cash, attendees will, according to the RPW convention ticket website, have exclusive access to pray with top GOP office holders.

“Scott Walker, Brad Schimel and the Republican controlled legislature are singularly focused on raising campaign cash,” commented One Wisconsin Now Executive Director Scot Ross. “Public policy isn’t the only thing they’re willing to auction off, they’ll even make you pay to pray with them.”

The ticket site for the Republican Party of Wisconsin convention advertises conventioneers have the opportunity, “To wrap up the weekend, join us for our 17th Annual Sunday Prayer Breakfast. Join Governor Scott Walker, Senator Ron Johnson and Attorney General Brad Schimel in prayerful reflection, along with musical entertainment by the Elmbrook Church Choir.”

But to do so, they’ll have to drop $50 per person into the GOP’s coffers. 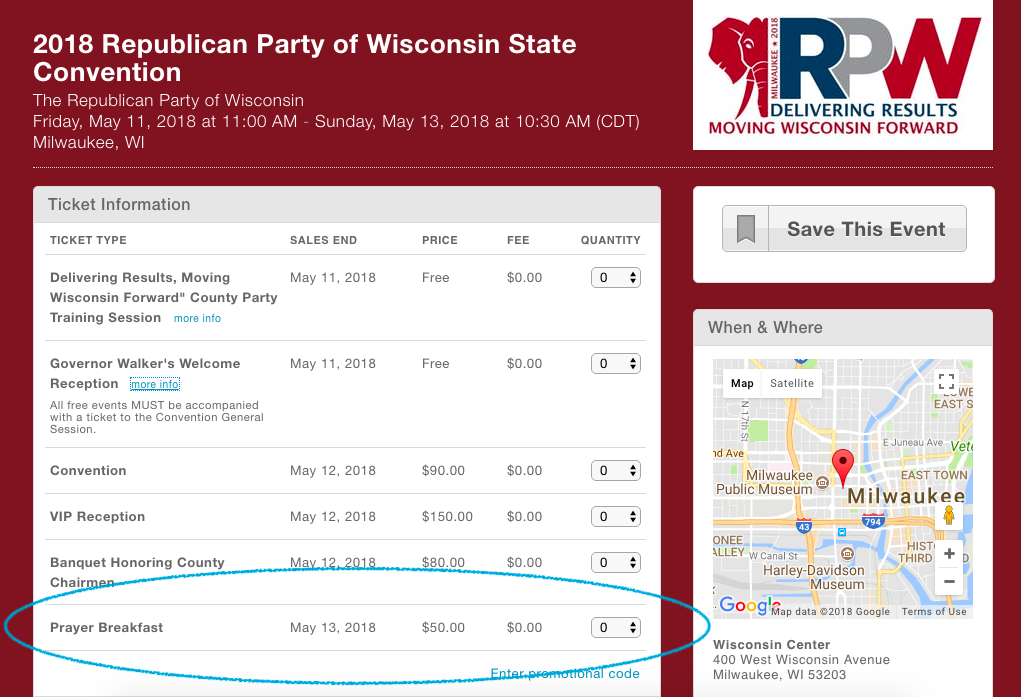 Public Policy Isn’t The Only Thing They’ll Auction Off

Earlier this week it was revealed that companies winning no bid contracts as part of Gov. Walker’s $4.5 billion taxpayer subsidy to Taiwanese electronics manufacturer Foxconn have donated over $359,000 to Scott Walker’s campaigns. Fellow pay to pray attendee Brad Schimel has also been under scrutiny this week for disclosures about his paid appearance before a hate group at a luxury California resort.

Ross concluded, “For many of us who pray first thing in the morning, it’s nice our higher powers don’t charge us $50 a pop to do it. But then again, Scott Walker has always worshipped a campaign check over everything else.”