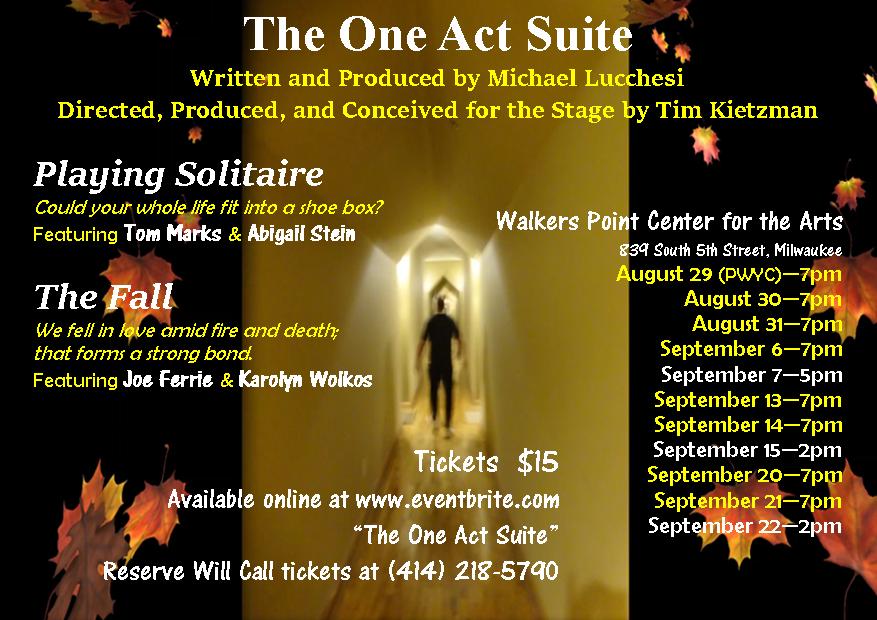 The One Act Suite

The One Act Suite by Milwaukee playwright Michael Lucchesi, opens August 30 for a 4-weekend run at Walker’s Point Center for the Arts, 839 S. 5th Street, in Milwaukee. Performances are at 7:00pm on Fridays and Saturdays (5:00pm on September 7), and 2:00pm matinees on September 15 & 22.

In Lucchesi’s words, “World events are a complex canvas. Wars, plagues and migrations will have millions of words written about them. But every day events can also affect history. Sometimes tucked away in a corner is a face or an object, which, when exposed to daylight, appear to have been quite significant. The lives affected by these events may seem insignificant and pass barely noticed, sometimes to be forgotten entirely.”

During The Fall 1959, a common yet unpleasant aspect of life, a funeral, raises the veil on the less-than-honest marriage of Josef (Joe Ferrie) and Lydia (Karolyn Wolkos). The setting is an apartment in a Polish city relatively near East Berlin.

In Playing Solitaire, an aging war veteran (Tom Marks) spends an afternoon with his daughter, Lou (Abigail Stein) in his one bedroom apartment in Milwaukee. Their conversation leads to memories of WWII events which, in turn, lead to eye-opening disclosures.

“Peoples’ lives can be affected as much by small events as by the history changing one,” offers Lucchesi. “Today’s stories deserve to be told, re-told and remembered. By form, these plays have a similarity to the short story—vivid details and description which drive the narrative. And there are actors of a certain age who have a lot to offer, when given the right opportunity.”

The One Act Suite is directed by Tim Kietzman. Larry Beckley is Assistant Director.

Tickets are $15 and may be purchased online at www.eventbrite.com/d/wi–milwaukee/the-one-act-suite/ Will Call reservations can be made by emailing lucckyshram@yahoo.com or by calling 414.218.5790.