Distinguished professors are acknowledged for making a significant impact on their fields of study. 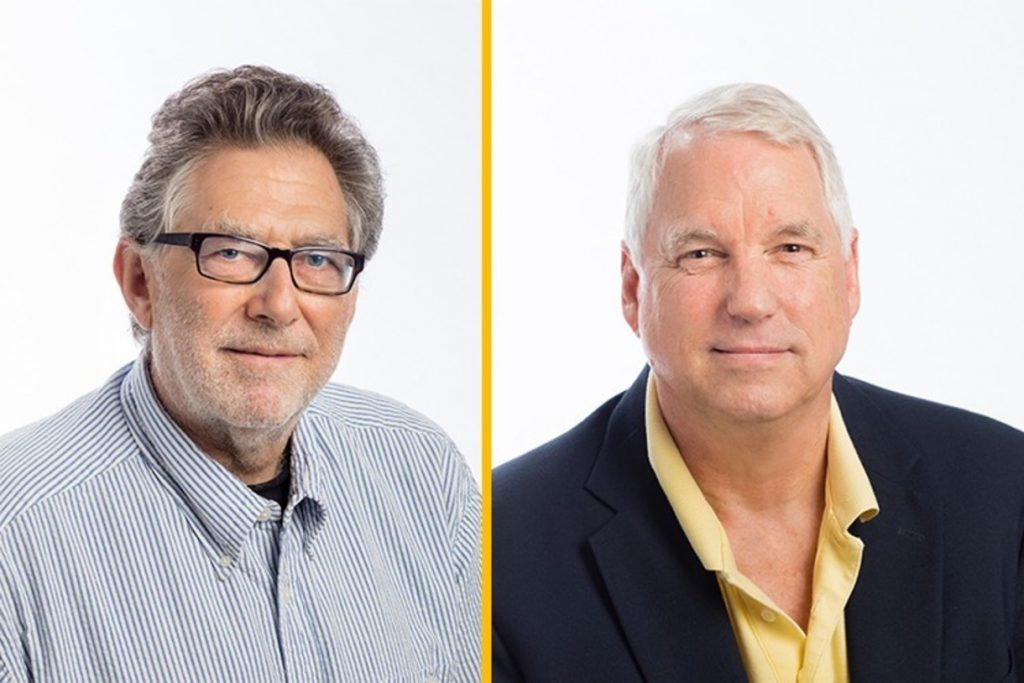 “Our distinguished professors are intellectual leaders not only at UWM, but in their disciplines nationally and internationally,” Provost Johannes Britz said. “Collectively, their contributions have made a profound impact on UWM’s attainment of R1 status. On behalf of Academic Affairs, I extend my congratulations to our newest distinguished professors, Richard Grusin and Richard Stockbridge.”

UWM has been listed as a university with “highest research activity,” a status known as R1, since 2016 by the Carnegie Classification of Institutions of Higher Education.

A new media scholar whose work has been translated into six languages, Grusin arrived at UWM from Wayne State University in 2010 to lead the university’s landmark humanities research operation, the Center for 21st Century Studies. The center just celebrated its 50th anniversary this October.

Grusin says his students and scholarship continue to energize him.

“I think a class is successful for students when they walk out and their heads are spinning because they’re thinking in a way they haven’t been thinking before,” he said. “And as a professor, my best class is when I learn something I didn’t know before class started. That’s why I’m a teacher.”

Grusin’s breakout piece of scholarship is the 1999 book “Remediation: Understanding New Media,” which was the first comprehensive theory of new digital media. Grusin also is author of “Culture, Technology, and Creation of America’s National Parks” (2004), “Premediation: Affect and Mediality After 9/11” (2010) and other books, articles and chapters.

He stopped doing 19th century American scholarship in the mid-’90s, almost by accident. Then a professor at Georgia Tech, Grusin was teaching aspiring web designers and developers who demonstrated a need for a theory of new media that could help them design their webpages and other digital interfaces more thoughtfully. To meet that need, Grusin wrote “Remediation” with Georgia Tech colleague Jay David Bolter.

“Mediation became the main concept of this book and all my subsequent work,” says Grusin. “All my work starts with Marshall McLuhan’s programmatic claim that ‘the medium is the message.’ It’s critical to study the form and technology of the media as much as the content.”

The book became something of an overnight sensation, earning the 2001 Marshall McLuhan Award for Outstanding Book in the Field of Media Ecology and generating around 8,000 citations to date.

As technology grew increasingly concerned with speculating and modeling the future, Grusin’s writing shifted to premediation. Anyone watching, reading or reporting the news has seen premediation in action, either by “pre-mediating” events that will happen in the future – a flu outbreak, election, or a brewing tropical storm – or by responding emotionally in the present to these premediated events.

“That’s where we are now,” says Grusin. “Media is not just about content or use. There’s also our relationship with media – how it can intensify our feelings and shape our behavior now or in the future.”

Stockbridge is a mathematician whose mastery of stochastic control problems has earned him research funding from the National Security Agency, National Science Foundation and the Simons Foundation.

Receiving congratulatory messages from colleagues around the world has been gratifying to Stockbridge. “That’s one of the real rewards of this experience,” he said. “Hearing from colleagues whom I admire and respect, whose work has positively impacted my own.”

The news from abroad was particularly good on a recent Friday afternoon. After a four-hour Skype session and a six-month mathematical struggle, Stockbridge and a Berlin-based colleague believe they have identified a suitable framework to analyze a problem whose foundational mathematical aspects “need to be tied down very carefully.”

“Math research is like a puzzle,” says Stockbridge. “You have various bits and pieces to move around and fit together, but the puzzle – or the problem – has to work within the rules of what is acceptable mathematical proof.”

Most of us have some idea of what the puzzle we’re piecing together looks like because there’s a picture on the box to guide us. A stochastic control problem lacks that visual clarity because the processes are random and any decision inputs only partially influence their behavior. Stockbridge’s particular area of research is the intersection of stochastic control and linear programming.

To get a feel for linear programming, imagine running a factory that manufactures three different but related products, each one created via a distinctly different production process but utilizing some of the same types of materials. You only have so much time and money to invest and only a limited amount of materials. “You want to maximize your profit by figuring out how many of each different product to make and sell,” says Stockbridge.

Stockbridge arrived at UWM in 2000 from the University of Kentucky. He’s been listed as author or co-author of 48 publications since receiving a PhD in mathematics from the University of Wisconsin-Madison in 1987. In addition to dozens of journal articles, he’s written the 2008 volume, “Markov Processes and Related Topics: A Festschrift for Thomas G. Kurtz,” with Stewart Ethier and Jin Feng.

According to the Mathematics Genealogy Project, an intellectual family tree of 286,000 mathematicians dating back to 1666, Stockbridge has advised six research mathematicians. Thomas Kurtz advised Stockbridge’s 1987 dissertation, “Time-Average Control of Martingale Problems,” subsequently published in the Annals of Probability.

Explaining his work to non-mathematicians is among the more challenging and rewarding aspects of his research, Stockbridge says. Most rewarding, he says, is finding and testing novel ideas and discussing them with others in his field.

About UWM
Recognized as one of the nation’s 115 top research universities, UW-Milwaukee provides a world-class education to 27,500 students from 91 countries on a budget of $689 million. Its 15 schools and colleges include Wisconsin’s only schools of architecture, freshwater sciences and public health, and it is a leading educator of nurses and teachers. UW-Milwaukee partners with leading companies to conduct joint research, offer student internships and serve as an economic engine for southeastern Wisconsin. The Princeton Review named UW-Milwaukee a 2019 “Best Midwestern” university based on overall academic excellence and student reviews, and the Sierra Club has recognized it as Wisconsin’s leading sustainable university.