Fred Sitzberger recognizes how important a strong athletics program is to a university. 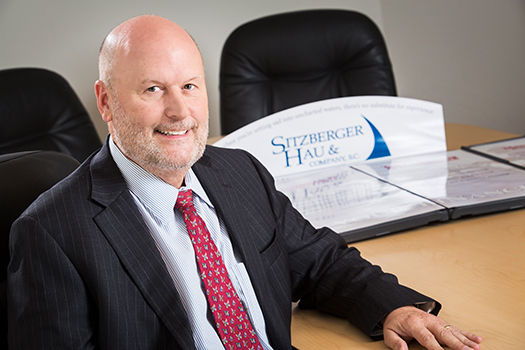 MILWAUKEE (Oct. 18, 2016) – The University of Wisconsin-Milwaukee’s Athletics Department has received a $1 million gift from alumnus Fred Sitzberger, president of accounting firm Sitzberger Hau & Company S.C. This gift, which is the largest ever made to Milwaukee Athletics, will support the Panther Excellence Fund, an unrestricted fund that helps all UWM student-athletes.

“This kind of dedication from an alumnus is so encouraging to see,” Chancellor Mark Mone said. “I could not be more grateful to Fred for his generosity and, perhaps most importantly, for his vision for our university. His willingness to support his alma mater is a marvelous example of giving back.”

Director of Athletics Amanda Braun echoed the chancellor’s appreciation for this historic gift.

“We are so thrilled to be able to make this announcement today,” Braun said. “We are extremely grateful to Fred for his generosity, which will benefit all Milwaukee student-athletes both now and in the future. Fred exemplifies the true spirit of philanthropy.”

Born and raised on the southwest side of Milwaukee, Sitzberger served in the U.S. Army before earning a degree in accounting from UWM’s Lubar School of Business in 1978. He began his professional career at Ernst & Young, eventually becoming a chief financial officer within the financial industry. In 1994, he returned to public accounting and founded his own practice, where he currently serves as president.

Sitzberger recognizes how important a strong athletics program is to a university. “UWM has such a wonderful academic standing, and if we could further develop Milwaukee Athletics, we could continue to elevate the brand and our enrollment would go up,” Sitzberger said. “I always had a tough time in school, and I appreciate all my teachers did for me when I went to UWM on the G.I. Bill. It’s paid off very well, and each year, I give 10 percent away.”

In addition to being a generous donor, Sitzberger has been an active alumni volunteer for years, serving on the UWM Alumni Association Board of Trustees and on the Board of Directors of the UWM Foundation.

Sitzberger believes changing and growing is important, whether that’s personally, in business or at the university. “In the last 10 years, there have been transformative changes at UWM,” he said. “Amanda Braun took a dynamic leadership position, and we need to support that. New blood at the institution has been very good, and the vision for UWM is phenomenal.”

About UWM
Recognized as one of the nation’s 115 top research universities, UW-Milwaukee provides a world-class education to about 26,000 students from 81 countries. Its 14 schools and colleges include Wisconsin’s only schools of architecture, freshwater sciences and public health, and it is a leading educator of nurses and teachers. With a budget of $667 million, UW-Milwaukee partners with leading companies to conduct joint research, offer student internships and serve as an economic engine for southeastern Wisconsin. The Princeton Review named UW-Milwaukee a 2016 “Best Midwestern” university based on overall academic excellence and student reviews.

About Milwaukee Athletics
The Milwaukee Athletics Department is recognized as one of the top programs in the Horizon League. Since joining the League in 1994, the Panthers have won seven McCafferty Trophies, which are awarded annually to a member institution with the most performance points in the League’s 19 championship sports. UWM has claimed 91 Horizon League Tournament championships and 43 regular-season titles, while its teams have made 57 different NCAA Tournament appearances since joining the ranks of the NCAA Division I level in 1990. In addition, its student-athletes have posted a 3.0-or-higher GPA for 32 consecutive semesters and have had three National Academic All-Americans honored in the past two academic years.