February 19, 2018 – [Milwaukee] Milwaukee Repertory Theater presents the powerful theatrical event, Until The Flood in the Stiemke Studio beginning March 13 through April 22.  Fresh off its Off-Broadway run where it earned a New York Times Critics’ Pick, Until The Flood is performed by powerhouse creator and Pulitzer Prize finalist Dael Orlandersmith.

Until The Flood explores the reactions of the St. Louis region to the shooting of Michael Brown in Ferguson, Missouri. Orlandersmith crafted a stunning play by conduction hundreds of interviews to create eight characters with unique perspectives that reflect a range of human experiences in this tour-de-force one woman show.

Until The Flood begins performances March 13 and runs through April 22 in the Stiemke Studio.   Opening night is set for Friday, March 16 at 8:00 pm. Tickets are now on sale and can be purchased online at www.MilwaukeeRep.com, by phone at 414-224-9490 or in person at the Ticket Office (108 E. Wells Street).

Executive Producers for Until The Flood are Jackie Herd-Barber and Michael Barber, and John and Connie Kordsmeier.  The Stiemke Studio Season is presented by Ed Seaberg and Patrick Smith. The Rep is sponsored in part by The United Performing Arts Fund.

Until The Flood Public Performance Calendar
Artists, dates and ticket prices are subject to change 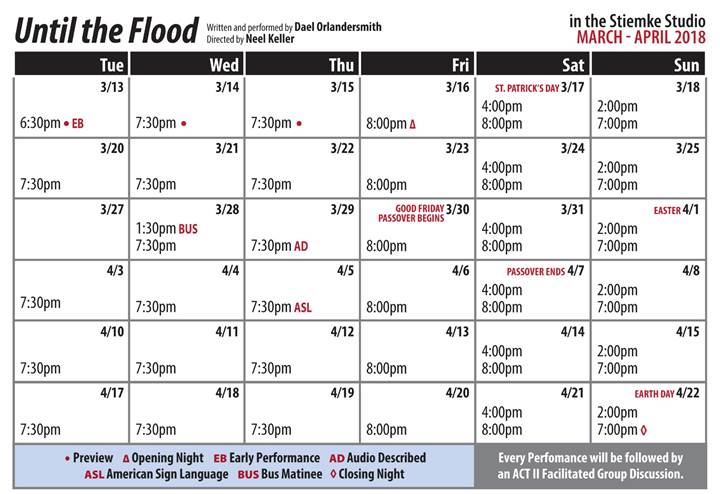 Until The Flood Public Performance Calendar

Rep-in-Depth: a pre-show conversation with understudy and Emerging Professional Resident Trachel Green will occur approximately 20 minutes before curtain for every performance.

Act II: Each performance of Until The Flood will be followed by ACT II which will feature a community guest responder followed by facilitated small group discussions lead by the Zeidler Center for Public Discussion.

This spring, The Rep is launching a community engagement series around One House Over, Until The Flood and Our Town that invites the community into a conversation about what it means to be a neighbor. The Rep is responding with a concentrated engagement initiative to connect the stories on stage to the stories of Milwaukee. The Rep will host over 80 Neighbor Series engagement events, from March to May 2018, created from a variety of opportunities for our audiences—and our neighbors—to add their voices, tell their stories, and participate in Milwaukee Rep’s mission to ignite positive change in our community. You’re invited to join us this spring: to listen, to share, and to re-imagine the future of our neighborhoods and city. For more information on these events please visit: https://www.milwaukeerep.com/MKENeighbors

Audio-Described Performance: Thursday, March 29, 7:30pm – the show will be described for patrons who are blind or have low vision.

American Sign Language Interpreted Performance: Thursday, April 5, 7:30pm – the show will be signed for patrons who are deaf or have low hearing.

Milwaukee Rep is the largest performing arts organization in Wisconsin in terms of audiences served and one of the largest professional theaters in the country. Each year, The Rep welcomes up to 275,000 people at nearly 700 performances of 15 productions ranging from compelling dramas, powerful classics, new plays and full-scale musicals in its three unique performance venues – the Quadracci Powerhouse, Stiemke Studio and Stackner Cabaret. Over the course of six decades, The Rep has gained a national reputation as an incubator of new work, an agent of community change and a forward-thinking provider of vital arts education programs. Under the leadership of Artistic Director Mark Clements and Managing Director Chad Bauman, Milwaukee Repertory Theater ignites positive change in the cultural, social, and economic vitality of its community by creating world-class theater experiences that entertain, provoke, and inspire meaningful dialogue among an audience representative of Milwaukee’s rich diversity.