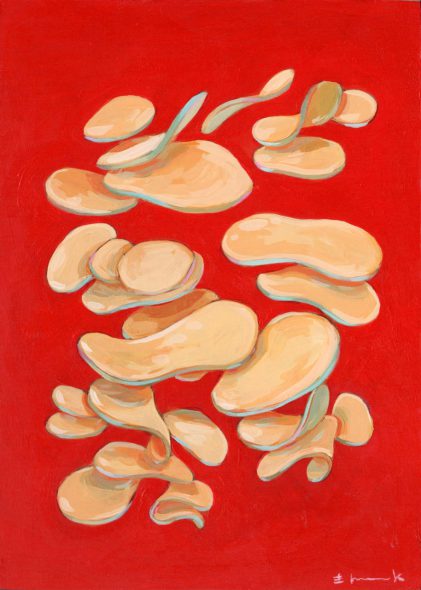 Universal Fascination: A Modern Cabinet of Curiosity – Natural history, landforms, science, science-fiction, diagrams, medical illustrations, items under glass, art, abstraction, etc., both real and invented, have enticed humanity for many years. We invite you to view our modern interpretation of a “Cabinet of Curiosities.” In this modern/artistic interpretation, we will have on display, things that will draw you in for an intimate look at what we have created. We encourage you to closely study the pieces, and ask questions. Beauty is in the world all around us, and the way we interpret it makes it even more interesting – James Demski, curator.

James Demski aka Jimbot is a professional designer and artist living in Milwaukee, WI with his wife, kids, and a few animals thrown in for good measure. James’s work has been shown in galleries and art spaces across the United States, and also internationally. His work has been in many art publications such as Juxtapoz and Artbox magazine, as well as several art books, such as the Gallery 1988 “Crazy for Cult” books, and “Newbrow: 50 Contemporary Artists” book. He even won Paul Frank’s first “Art Attack” contest! Currently he is running his own business “JIMBOT Studios” which accounts for his freelance work as well as his fine art. However, he is embarking on a new endeavor called “JIMBOT Labs”, making fun and friendly educational art geared to inspire kids to go for great things. Whatever he is up to, though, he is always having fun!

Eric Hancock takes many walks while finding small, nearly imperceptible beauty in the details of the world. Between the birds challenging each other for territory, moss and lichen growing over a reaching variety of surfaces, angles of urban structures finding purchase within nature’s form, and the deliciousness of eating food. These are sourced moments that he creates from. Aiming to inspire through art while encouraging people to slow down and find respite reflecting on who and where we are.

Angela Minga is a sculptor of hidden worlds, controlled chaos, unexpected twists to familiar stories, and spotty memories. The quirky yet dark undertones of my miniature characters and environments convey complex, detailed and ultimately open-ended narratives. Fictional scenes are transformed into a surreal space where scale, perspective, and circumstances of characters unlock the imagination of the viewer. These shadowy environments are hidden away behind faux walls. The only entrance is through small “keyholes” which skew the viewers’ depth perception, creating the illusion of stepping inside the tiny world. These eccentric models, dioramas and characters are formed by found objects, polystyrene foam, various clays, wood, and paint, and then are accentuated with intricate lighting.

Brandon Minga is a multidisciplinary artist practicing professionally for 14 years and is currently in residence at Flux Design. His artwork combines found objects, magazines, and old advertisements, drawing, painting, sculpture, and Welding. In addition to his own practice, Brandon owns and operates an artist collective called the “Mingadigm”, which specializes in branding, identities, interiors, murals and commissioned art for small & medium sized businesses. Brandon attended Milwaukee Institute of Art and Design where he received his bachelor’s degree in Fine Art in illustration with Honors. While most of his work has been primarily exhibited throughout southeastern Wisconsin it has been showcased nationally and internationally as well. Brandon has served as a two-time finalist in the Pfister Hotel Artist and Residency program and was also elected to create a 27 ft tall by 15 ft wide mixed media 3D mural for the Black Cat Alley public art space. He recently completed a large-scale mixed media painting with the XQ Super School Project in which the local community was able to interact and paint with him. Recently, Brandon has been announced as one of just thirty-two artists to be creating original artwork for the new Milwaukee Bucks stadium.

Brad Towell is a self-taught designer and screen printer currently living in rural Southwestern Pennsylvania. Having grown up in his parent’s Mom and Pop offset printing shop, Brad was inspired to make his own versions of the things he loved which included, stickers, posters, skateboards and t-shirts. Fresh out of high school Brad sought jobs where he could learn more about screen-printing and graphic design. 25 years later, having worked in various positions at apparel companies, freelance design and running Modesto Studios, a screen-print and design studio with his wife, Stephanie Towell,

Stephanie Towell finds her inspiration in all things old. She uses the fragility and crudeness of an object to tell a story that is personal, but open to interpretation. It is intended that each combination of material, and each narrative told will portray the same state of nostalgia that the work was created in, while remaining relatable and meaningful to the audience.

The Frank Juarez Gallery is committed to supporting artists working in painting, photography, sculpture, video, installation, and mixed media works. It aims to create an accessible, educational, and engaging exhibition space for artists, audience, and the Milwaukee community.

For further information on the exhibition, “Universal Fascination: A Modern Cabinet of Curiosity”, please email frankjuarezgallery@gmail.com or call 920.559.7181.